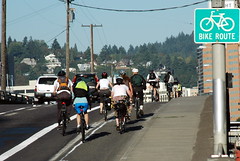 Two new surveys show that (not surprisingly) bicycle use continues to rise in Portland. 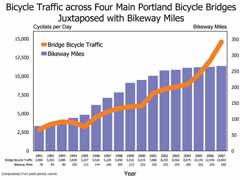 In 1991, the first year they counted bikes on these bridges, the total number of bike trips was just 2,850. According to PDOT, the numbers are gathered from pressurized hoses and are extrapolated from peak period counts.

In addition to bridge counts, PDOT is close to finalizing bicycle counts from other areas of the city, along with data on gender and helmet use. Stay tuned for that information.

In addition to the local bridge counts, the U.S. Census Bureau’s American Community Survey shows that bicycle commuting in Portland rose from 3.7% in 2005 to 4.4% in 2006 — a 145% increase over the past 10 years. Over the same period, drive-alone trips were down 1.3%, and were at their lowest point in 10 years.

View the full table of data from the ACS survey: Means of Transportation to Work 1996-2006

Once again — as the graph above shows — bicycle use in Portland has increased despite relatively small improvements in infrastructure. In a story about these numbers that appeared in the Oregonian on Friday, Transportation Commissioner Sam Adams’ Chief of Staff Tom Miller said, “Our infrastructure investments have not kept pace with the growth in ridership. We’re actually behind.”

Given these numbers, just imagine what would happen if they caught up.

Given Portland\’s national success at bicycling…and the recent citizen led efforts at updating street names…how about a bike community effort to change the name of Hawthorne Blvd to reflect its key function as a bicycle arterial.

Todd B,
How about \”Bud Clack Bikeway\”?

The continuing growth of Portland\’s bike traffic begs the question, \”How long will it be until Portland-area motorists begin campaigning for designated car lanes?\” It just keeps getting better and better.

A trend I have noticed is an increase in bicyclists on arterials where there is no reasonable alternative, in this case SE/NE 28th Avenue, which crosses I-84.
Bicyclists are taking over the street, calming/slowing traffic and making it into a defacto bikeway. No need to wait on PDOT for this trend to continue. Seize the Street! Take the Lane!

SE/NE 28th is just begging for sharrows markings all the way from SE Stark to NE Broadway.

I agree with Lenny. To a certain extent, we are our own infrastructure. We ourselves calm traffic and increase the visibility of bikes.

If enough bikes take over a street, it becomes safer for all riders.

I find it interesting to think about the relative importance of improving infrastructure and clamoring for more bike funds vs. just seeing what happens as more and more people bike.

I realize the best is to do both, but I also understand that \”organic, human infrastructure\” is cheaper, less political, and is likely to happen sooner than real, physical infrastructure.

As more and more folks take to the streets on bikes, it will naturally force the political, bureaucratic, and social changes we are all working so hard for.

I\’m thrilled about this, but not actually surprised. I\’ve been biking as my main form of transportation in Portland for over 10 years, and this year I just had the feeling that there are WAY more people on the roads with me. 20% feels right, actually. Everywhere I go, there are bike parking shortages. I see parents and kids and older women everywhere. There\’s bicycle congestion during peak hour commutes. It\’s crazy!

Now is the time to use our growing clout to demand the facilities and respect we deserve.

I live near SE Ankeny St, and I routinely have to wait for bicyclists to pass so I can cross the street on my walk home from work. Bicyclists ride by my house whistling and singing. The other day, there were so many bicylists riding down that street that I was joking to my partner about how bad the traffic in Portland has gotten, and a couple other people were just standing on the corner smiling in amazement. I love it!

\”Now is the time to use our growing clout to demand the facilities and respect we deserve.\”

maybe not a street name change, but how about a \”Go By Bike\” neon sign on the bridge?

I think a \”Go By Bike\” neon sign on the Hawthorne Bridge would be awesome!

\”The other day, there were so many bicylists riding down that street that I was joking to my partner about how bad the traffic in Portland has gotten\” ~ Minda

\”Everywhere I go, there are bike parking shortages\” ~ Jessica Roberts

As much great dialog happens on this site, there could be a fresh 365 day calendar every year.

I second the \’Go By Bike\’ suggestion!

The Bike Revolution will not be televised! (But it will be well-documented by Jon Maus.)

Oh, and my personal favorite, \”Ridin\’ Bikes for Freedom.\”

Or, how \’bout a promotional poster we can sell for the BTA with Bud as the model and the caption \”Expose yourself to bikes\”?

\”Or, how \’bout a promotional poster we can sell for the BTA with Bud as the model and the caption \”Expose yourself to bikes\”?\”

Hmm, thanks but no thanks – we already get enough of that riding through Oaks Bottom 🙂

I like raspberry jam, peach jam\’s ok and blackberry jam is fine, but most of all I LOVE \”BikeJams\”…all backed up at a light; more of us than them. Bike On!

I have noticed more bike traffic on the Interstate Bridge too, in the past two years that I have been riding to work.

I think a \”Go By Bike\” sign would be great for the Interstate Bridge, since that is an automobile traffic nightmare. A sign on the Hawthorne Bridge is just preaching to the converted! 🙂

or celebrating our conversion, which is worthwhile.
How about converting the old white stage sign above the Burnside Bridge…it needs more bikers. Turn Rudolph into a bike commuter with a red tail light.

i like feralcow\’s idea. that feralcow is a smart dude. i know him!