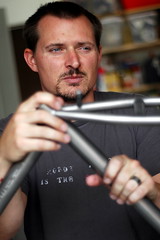 Last fall, Chaney quit his “unfulfilling” job as a financial analyst and decided to chase his dream of building bike frames — and his Vertigo Cycles brand — full time.

“I’ve been wanting to do this for over ten years, but I’ve always been talked out of it either by friends, or by myself.”

Chaney and his wife Heather moved to Portland from Baltimore, Maryland in June of 2005 so she could attend the teaching program at Lewis and Clark College. Until last October, Chaney was working remotely from Portland. When his company began to downsize, they gave him an ultimatum: move back to Baltimore, or find a new job.

At about that same time, Heather was finished with school and had secured a teaching position. The timing was perfect; “I figured, what better time to quit?”

With a green light of support from his significant other, Chaney jumped head-first into framebuilding.

Chaney got his first taste of the bike industry back in 1994, when he worked as a bike shop employee for several years. That’s also when his love of titanium first took root.

Chaney has preferred “ti” since the mid-90s. Back then, he said, “I had a titanium WTB Phoenix made by Steve Potts and I loved it.”

Unlike the majority of small, custom framebuilders who work with steel tubing, Chaney prefers titanium. Titanium is revered for its strength, light weight, and ride characteristics; but is also a harder and more expensive material than steel. 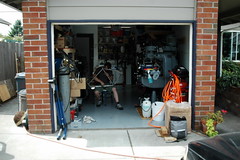 Potts is a legendary builder and Chaney realizes that mastering titanium will take time, “My welds are not where I want them to be at this point…I’ll be learning for a long time.”

To help speed that process along, Chaney took a week-long welding course from veteran builder Chris Zanotti of Mint Cycles. He has also tapped into an unlikely training ground: his local public school. 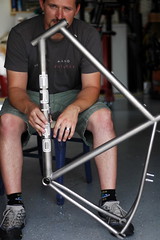 He lives just a few miles from the fully stocked metal working shops of Benjamin Franklin High School. Chaney has taken two courses from the school, and has a good relationship with the teacher in charge of the program, “He lets me come in pretty much whenever I’d like, as long as I don’t disturb the students.”

Chaney has also found assistance from Portland’s vibrant and supportive, framebuilding community. While purchasing a cutting tool from Andy Newlands of Strawberry Bicycles, Chaney met framebuilder Natalie Ramsland of Sweetpea Bicycles (she works out of Newlands’ shop in Goose Hollow). 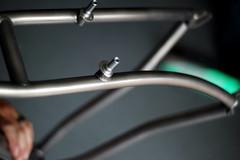 Ramsland was impressed with Chaney’s work. “That ‘cross bike is amazing,” she said, “He decided to not just do an s-bend, but a compounded s-bend, and then hand mitered them. To take that on, you’ve got to either have a lot of experience or a lot of persistence.” And in the end, she said, “the frame was just mind blowing, it looked really great.”

Local cyclocross racer Richard Sweet came to pick up that frame just a few hours after I left. When he got it home and built it up, he posted photos of it on a local email list with the message, “I’m not sure what his turn around time is currently but I can guarantee you it will only get longer as his name gets out there.”

You can meet Sean and see more of his work at the upcoming Oregon Handmade Bicycle Show on November 11th.

See a few more photos from my visit with Sean Chaney.

Awesome! Look forward to seeing these bikes around town!

Does he know all the links on his website are broken?

Is there anyone else in town doing custom ti frames?

He knows and is working on it.

I heard there\’s someone in Salem working with Ti.

Great to see you are making a go of it! You were a fantastic Ti builder! Have a great Portland show, and kick DW in the nu*z for me!