Terry Brumfield has been rolling “rat style” on custom bikes around north and northeast Portland for over four decades and shows no sign of slowing down any time soon.

When I saw him and his aqua blue and red cruiser on Bridge Pedal last weekend, I knew I needed to take a closer look. We met in Peninsula Park Thursday night.

Brumfield, 53, was born in New Orleans, Louisiana. He grew up in St. Johns and the Columbia Villa neighborhoods. These days he lives just over the river in Vancouver but comes back often to see family and friends.

“I had that ‘rat look’ when I was like 11 or 12 and didn’t even know it!” he said, laughing so his jewelled lower row of teeth shined in the light. He told me he started riding bikes around age 6 or 7, but his first bike was very heavy. It had some cool parts and solid rubber tires — which were great for not getting flats, but not for rolling smoothly. When he was 10, Terry’s mom bought him a ten-speed for Christmas. This was mid-1970s during the big road biking craze.

Terry was happy to have a lighter bike, but all the gears, strange handlebars and skinny tires just didn’t do it for him. “I wasn’t really feelin’ that, you know what I mean?” he said. Somehow he’d come across a beach cruiser and it was love at first sight. The next Christmas he owned one and immediately took the parts of his first bike and started to customize it. “At first my mom was kind of mad, but then she was like, ‘Dang, my son is great!’ because I took those old parts and I came up with something new.”

“That bike was my favorite bike. It came from about five different bikes but you would never know it unless I told you. It all collaborated. It looked like it was fresh off the lot.”

The next big step in Terry’s biking evolution came when he and his younger brother did their first big ride together across town. It was just over four miles from St. Johns to the Vancouver-Williams corridor where his mom’s sister lived and they drove their all the time. So much so, he and his brother had committed the streets to memory. Armed with the knowledge that all they had to was go to Columbia Park, then Lombard, then to Interstate, then to Rosa Parks (Portland Blvd back then), then Vancouver — they begged their mom to make the trip alone. She eventually relented.

After that first successful trip across town, Terry said, “It was on from there! I started building more bikes out of nothing because I wanted all my friends to ride now.

Riding with friends was always the thing for Terry. Once friends were bitten by the cycling bug, he said there were four solid “cliques” of 10-12 kids that would ride bikes together all over north and northeast Portland. It was the era of the Schwinn Stingray aesthetic with “tuffs” (mag wheels), banana seats, and whitewall tires. And Terry kept them all rolling nicely.

“I knew we was onto somethin’,” he said, “because we didn’t have the money to get new bikes, but I could get parts from an old bike and do my own thing.  Put my own twist on it.”

The twist he put on his latest creation is a 1961 Chevy Impala SS. It’s the car his uncle used to have. “He was the cleanest brother, and he had cleanest car,” Terry recalled.

The bike is full of fun details.

The ’76’ balls were a must-have touch because that’s the main thing Terry remembers from his uncle’s car. He had the rear license plate made by a guy on e-Bay and it’s mounted on a styrofoam core to give it extra width. The blanket roll is for BBQs at the part and he stuffs tools and other essentials inside it. He re-upholstered the saddle himself and added the tassels, jewels, and the Impala badge (which he got from a friend in Lloyd Mall). All the badges are authentic Impala car badges. The front windshield was made for a scooter and has gotten a complete overhaul to match the rest of the bike. The headlight runs off a 12-volt battery pack and he’s got a remote on his dashboard to change colors of the LED light strip under the downtube.

Even his helmet is fully-custom.

And 40 years after rolling with friends, Terry’s still got the love. He started the ‘Just Dippn Rydaz Bike Club’, which is mostly family and close friends; but he’d love find more people to ride with.

As long as he’s riding, it’s all good.

How does riding his bike make him feel? “Man, it’s an emotion. I look forward to it all the time. When I get off work I tell my boss, ‘I’m going for a ride’ and she knows what that means. It’s a meditation kind of thing. Say for instance me and my girlfriend get into some bickering or something, she’ll tell me, ‘you need to go on your bike’ and when I come back I’m a whole new person.”

If you want to see Terry and his bike in person, he’s been invited to show it at the annual Aloha Junior Baseball Organization Car Show this Sunday (8/20) from 10:00 am to 2:00 pm at the Peppermill Pub parking lot at 17455 SW Farmington Road.

That bike is a thing of beauty. I totally dig the fat rims and that custom helmet. Nice job, Terry. True craftsmanship.

That is a beautiful bike and you wrote a great profile. Thanks!

So many talents on display here! Not just the design, the metalwork and painting but upholstery, and even wood-graining!

Great write up. I love seeing Terry and his bike out on group rides.

Beautiful bike. Any idea what it weighs?

Matt
Reply to  Mark In NoPo

If you have to ask, you can’t lift it.

“How does riding his bike make him feel? “Man, it’s an emotion.””

I so get that. I got up tis morning not really ready for the week.

I love all of the details on this bike, you can see the love and care that has gone into it. Love this!

Terry, you’ve got a great sense of style. 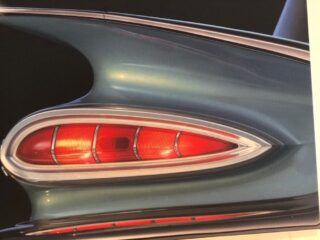