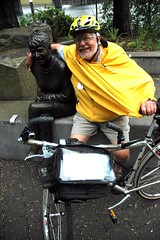 The meaning of last Friday’s Tour of Tomorrow bike ride can be summed up by one simple fact: a majority of the Metro Council (4 of 7 members) rode the entire 40 mile, bi-state route.

The ride — which was created by Oregonian columnist and Cycle Oregon founder Jonathan Nicholas and Mike Houck from the Urban Greenspaces Institute — is meant to foster connections between decision makers and create a, “shared vision for a regional bicycle route network.”

With over 100 hand-picked politicos, planners, and advocates, and deluxe support from the Cycle Oregon crew, the ride has become an annual outdoor networking and educational opportunity like no other. 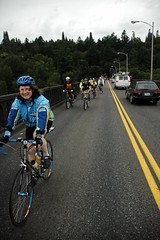 Appealing to the collective power of the assembled group, Zari Santner spoke at the outset of the ride and said, “We need all of your help to fill the gaps that remain in Olmstead’s vision of the 40-mile loop.”

The ride began at the Discovery Center in the South Waterfront Development. From there we rode down the Willamette Greenway Trail to the Sellwood Bridge (we were helped across by a police escort) and after stops at Sellwood Park and Peninsula Park we tackled the I-5 bridge into Vancouver.

We ate lunch at the Pearson Air Museum and then made our way along the Burnt Bridge Creek Trail before looping back to Portland.

Along the way, we were briefed by planners and advocates on the status of various trail projects.

At Sellwood Riverfront Park, Sellwood Bridge project manager Michael Eaton (who wore this cool Multnomah County bike jersey) reminded us of the challenges in planning a bridge for the next 100 years and said they’re currently trying to narrow 124 design options down to four. (If you’re interested in helping with that decision, attend tomorrow night’s open house).

At Peninsula Park in north Portland, city bike coordinator Roger Geller addressed the group. Framing his efforts to update the Bicycle Master Plan and make biking a safer option for all Portlanders he said, “We don’t think riding a bike for transportation should require bravery.” 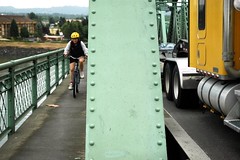 Riders got a sense of the
narrow I-5 bridge crossing.
(File photo)

At our lunch stop at the Pearson Air Museum (in the Vancouver National Historic Preserve) Metro Council President David Bragdon gave an inspiring pep talk. He urged the crowd to network, get organized, and “cross jurisdictional boundaries” to connect the remaining “great eight gaps” that exist in our regional trail system.

He spoke of our region’s “natural gifts” and said completing these major gaps is “doable” and that, “It’s not a vision, it’s a goal.”

To illustrate the irony of our region’s priorities, he noted the ease of which goods move in and out of PDX Airport, “Cows can fly to Japan, but a person can’t cross the Sellwood Bridge.” 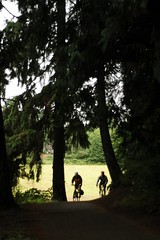 After lunch we discovered the lush beauty surrounding Vancouver’s Burnt Bridge Creek Trail. Built 30 years ago, its narrow paths are crumpling under pressure from tree roots. Vancouver-Clark County Parks Director David Judd said they “didn’t know any better” back then.

He also shared news about the Chelatchie Trail. This exciting project is gaining steam and will eventually become a 33 mile rail-trail through Clark County.

On our way back to Portland, we stopped at a picturesque bluff on the campus of the University of Portland. We heard updates on the Waud Bluff and North Portland Greenway trails from citizen trail advocate Francie Royce.

The ride ended back at the Discovery Center were the menu included gourmet food, drink, and another healthy serving of conversation.

To develop a fully connected, regional, bi-state trail network it will take a broad, cooperative effort. The relationships forged and information gleaned on this ride is a solid step in achieving that vision goal.

For more photos of the ride, enjoy the slideshow below:

I applaud the effort and vision of each of these individuals, but it doesn\’t sound very \”regional\” from the description, merely Portland and Vancouver. How about Gresham and Troutdale? Milwaukie? Gladstone? Beaverton and Hillsboro? Was there any talk of the Trolley Trail in Clackamas County, or the need for a link from Gladstone / Oregon City to Champoeg State Park? (preferably with ties to the new bike trail in Canby)

How about regional cooperation / coordination issues with the Clackamas and Washington County commissioners? Were any of them present on the ride?

I\’m sure there is some effort to create a truly regional system of paths, trails and bike lanes / bike boulevards, but to those of us on the fringes, it sometimes feels like we\’re being paid lip service.

I hear your pain. … but this was just one ride and not everywhere could be covered.

And to answer your question… during Bragdon\’s lunchtime talk he mentioned the \”Eight Great\” trail gaps in Metro\’s vision.

among them were the Westside Powerline Trail, Fanno Creek Trail, the Gresham-Fairview Trail, the Cazadero Trail

those trails expanding way beyond \”merely Portland and Vancouver\”.

You should contact Jerry Norquist at Cycle Oregon to make sure you and any other officials you have in mind are on the ride next year.

Good to hear that they talked about Fanno Creek, Gresh-Fair, Powerline and Cazadero. Usually whenever policy makers talk, we never hear about the fringes (not singling you out, Jonathan, the Oregonian, Tribune, KATU, KGW and KOIN all ignore 80% of all bike news not pertaining to Portland proper – you, OTOH seem to cover 80% of the fringeland news, and I know you\’re not omitting the rest – just unaware)

I guess I\’m trying to call attention to the fact that outside the core, it\’s difficult to even get the news out as to what\’s going on, and correspondingly hard to gain momentum on support for any given project.