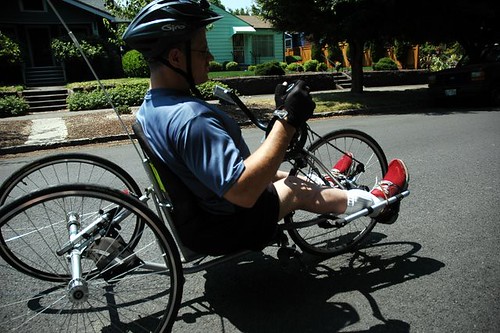 Woodstock neighborhood resident Ian Jaquiss is like many bike advocates in Portland. He works for a non-profit, encourages people to ride bikes, and sings the praises of pedal power at every opportunity.

But there’s one main difference: he can’t use his legs.

Hit by a car at the age of two — in the “wrong place at the wrong time” he says — Ian suffered a spinal cord injury which led to incomplete paraplegia and the loss of the use of his legs.

Now 41, Ian is the executive director of Oregon Disability Sports, a non-profit that connects disabled people with athletic opportunities like swimming, basketball, and Ian’s favorite, handcycling.

Last week I met Ian and joined him for my first handcycle ride.

A former Paralympic swimmer (he competed in 1988), and veteran of two handcycle marathons, Ian says he’s through competing and now he just likes the exercise and the “liberating” feeling of his weekly spins,

“Handcycling is more fun than any other sport I’ve done.”

He’s been handcycling for about three years, but admits that when he first started, mixing it up with speedy cyclists on the Springwater Corridor Trail was a bit scary,

“At first it was hard to get the confidence up to go out on the Springwater, but now, part of the fun is to go fast.”

Ian rides about 15-20 miles on average and gets out 5-6 times per week. He also does Bridge Pedal every year.

We met at Seven Corners bike shop and I found out that owner Corey Cartwright and Ian are neighbors and good friends. Ian says Cartwright has helped him out a lot in the past and still joins him for rides now and again. 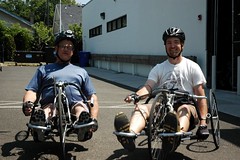 Me and Ian in the Seven Corners
parking lot.
(File photo)

After a few adjustments and a brief lesson, I was ready to mount the bike and give it a try. I was riding a “lean-steer” model made by Tualatin-based Freedom Ryder (with parts made by Bill Stites).

I sat in the chair, plopped my feet in the stirrups, and tried to orient myself. I’ve ridden just about every type of bike you can imagine, but this was a new sensation. With both legs, the handlebar, and crank assembly all around the front wheel, you have to work a bit to keep it from diving to either side.

Staying balanced was tricky but after a few minutes I was ready to try it out in the shop’s parking lot.

After a bit of trial-and-error I got the hang of it (it’s all in the hips) and we hit the open road. We pedaled down 21st Avenue to Ladds Circle, made a few loops around, and then returned to the shop.

Leaning into turns was a blast and the ride gave me a new perspective on riding.

Ian says he’d love to see more interest in handcycles, and he welcomes anyone (disabled or not) to give them a try.

“We want to help take the stigma away…if able-bodied people do it, than disabled people might think, ‘hey, there’s nothing wrong with that.'”

Oregon Disability Sports has three of handcycles available for test rides (two for adults and one for kids). All you’ve got to do is call Ian, get a short lesson, than off you go. As Ian says,

“What’s more fun, lifting weights in the gym, or taking one of these out for a spin?”

I’ll take the handcycle, hands down.

For more photos of our ride, browse the gallery, or sit back and watch the slideshow below.

For more info on handcycling check out:

Rode Springwater Trail & Eastbank Esplanade for the first time yesterday (awesome!), and saw someone on a handcycle. I dunno about stigma … my first reaction was: My God, that man must have strong arms!

Great post! I see people on recumbent bikes or handcycles and I can only guess their butts are not nearly as sore as mine after riding an upright.

I think my first reaction when I heard about hand cycles was something to the effect of… SWEEEEEET!!!!!

If I had the money I\’d go ahead and buy one to ride for fun, and so that in the event that my legs didn\’t feel like pedaling I wouldn\’t be trimet reliant. I think I will buy one if ever my cash flow is a bit more… flowy.

Typically modest Ian no doubt neglected to mention he completed a 500 mile Cycle Oregon on his handcycle. An amazing achievement.

I ride with Ian practically every morning. Unfortunately he has a lousy sense of humor and he can\’t control his flatulence. Aside from that, he\’s a reasonably decent guy. Just don\’t ride behind him.