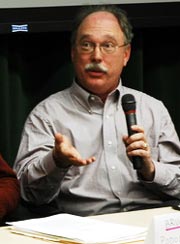 Economist Joe Cortright has just released a white paper titled “Portland’s Green Dividend” that claims our city’s land use and transportation policies, combined with our high rate of transit and bike use contribute $2.6 billion to our local economy every year.

This economic impact, Cortrights says, flies in the face of critics that say our economy will be stunted by encouraging public transit and non-motorized vehicle travel,

“Skeptics view biking, transit, density and urban growth boundaries as a kind of virtuous self-denial, well meaning, but silly and uneconomic. Critics see the seeds of economic ruin. They claim planning, policies and regulations that restrict use or access to resources impede growth and lower household income.

Both the skeptics and the critics are wrong. Being green means Portlanders save a bundle on cars and gas, and local residents have more money to spend on other things they value, which in turn stimulates the local economy.” 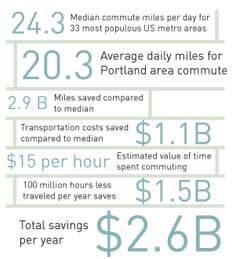 According to Cortright, one of the primary drivers of this economic boon is that Portlanders travel an four miles less per day than the national average. Four miles doesn’t sounds like much to you? Cortright does the math:

“The Portland metro area has roughly 2 million residents. If Portlanders traveled as much as the typical U.S. metro resident, that would produce 8 million more vehicle miles per day or about 2.9 billion more miles per year.

…the cost of driving is about 40 cents per mile…All told, the out-of-pocket savings work out to $1.1 billion dollars per year. This works out to about 1.5 percent of all personal income earned in the region in 2005.”

And where does this money savings go?

“Because this money gets re-spent in other sectors of the economy, it stimulates local businesses rather than rewarding Exxon or Toyota.”

And, since Portlanders are twice as likely to use transit and seven times more likely to commute by bike, Cortright says we save time (which he equates to $15 an hour), and we save 400,000 gallons of gas per day (which in turn means 1.4 million tons of greenhouse gases are not being emitted each year).

Take a look at a PDF of Cortright’s 5-page report here.

It goes at the same question with a focus on the return on investment of higher-cost, multimodal street design.

my reason for commuting by bike and trimet was purely economical at first, but leds itself well to political and social activism.

i save at least $2000 a year. most of that extra money goes right back into local business.

And of course the cheapest, if not the easiest, way to move freight…if that is what we need to do…is to help people get around on transit, by bike or in carpools/vanpools. 2 SOVs removed from the road = 1 Semi carrying a load.
This is how it works on Swan Island.

That $1.1 Billion amount does not take into account the multiplier effect. So the actual impact on the local economy is much larger.

This is great. I\’ve long believed that being green is actually good for the economy and this is just more proof that belief is true.

Great article! Thanks for posting this. I started commuting to work by bike for economic reasons as well and then found that it helps keep me calm and balanced. Once I realized commuting year round wasn\’t bad with the right gear I was even happier. TriMet is fine but you relinquish a lot of autonomy when you have to wait for a bus. I try to convince as many friends as possible that riding through the winter is an accomplishable goal.

This is indeed awesome. I\’m so sick of people using potential economic ruin as an excuse to keep doing thing the same old way. Like most of us here I save a good deal of money by riding, and I prefer to spend that money on local businesses whenever possible; locally produced goods being my first choice.

I do this because it saves the gas it would take to ship a similar product from somewhere further away (like, say, china) but the benefit to the local economy is pretty obvious as well.

I wonder what the Oregon Transportation \”Director\”…Mel Zucker has to say about this study? Mr. \”bicycles are used mainly for recreation\”, is even farther off base with his stupid theories. I bet he\’s never even been on a bike, let alone rode through the city. What a Zuckin\” idiot!

We, too, have saved a lot of money on car insurance, gas, and other auto incidentals since decreasing to one car and biking/bussing a lot more. A lot of that money definitely gets rolled-back into the community in a variety of ways (my favorite is buying as much as possible at the Farmer\’s Markets each week).

I\’d also mention that the biking culture of PDX is a major factor in our increasing cache as a socially progressive town with good planning. This reputation can only benefit our economy as well.