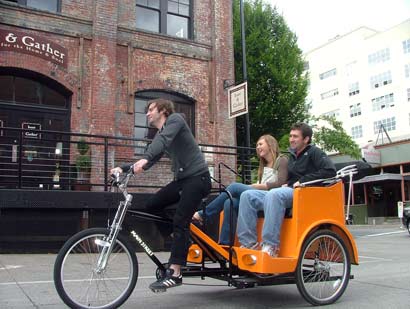 Pedicab rides in this town are usually taken for leisure, for romance, or both. But 33 year-old entrepreneur Jonathan Magnus hopes his new pedicab business will go beyond this “spur of the moment” transportation.

The southeast Portland resident and father of four, is about to launch PDX Pedicab.

Magnus, who formerly worked as a communications engineer, moved to Portland five years ago. While out for an evening downtown, he noticed a lack of human-powered transportation options and thought pedicabs would be, “a perfect way to move people around downtown.”

When he got home that night he searched the web and didn’t find anything (he later came across Casey Martell’s Rose Pedals Pedicab service and has since contacted him for advice), so he lined up investors and put together a business plan.

That was back in January.

Now, Magnus is set to have his first pedicab operators on the ground (just for training and testing) this weekend. By mid-August, he plans to have his bright orange pedicabs officially available for business. 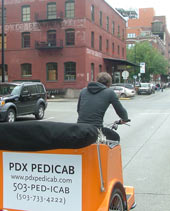 Magnus will start with two pedicabs and hopes to have ten by the end of summer. Eventually, if things go as planned, he thinks Portland can sustain 15-20 pedicabs.

Even with such a large fleet, Magnus says he’s not looking to compete with taxicabs.

“I’d like to work in conjunction with taxis. The truth is that a lot of the rides we’ll provide are ones that taxis wouldn’t be interested in. We’ll specialize in shorter, four block rides, which will free them up for the longer routes and larger fares.”

Magnus will employ a high-tech GPS system to help his drivers be more efficient. Using Nextel phones and a fully integrated GPS system, his dispatcher will be able to track the whereabouts of all the pedicabs at all times. When a call comes in to (503) PEDICAB, the dispatcher will send a text message to the closest driver and a detailed map of the next pick-up will appear on their handlebar-mounted screen.

These new pedicabs might raise concerns from traffic cops and regulatory offices. Magnus is ready for that and he hopes to be proactive in working with the city to make pedicabs an official part of the transportation mix. He says he’d even work with the city to consider a licensing program if necessary.

So far, the reception to his bright orange pedicabs has been very positive,

“We’ve been out several times and people are always really into it. It’s a great business because you get to perform a much-needed service and at the same time take a stance about an ecologically friendly transportation alternative.”

For more information, check out PDXPedicab.com. If you’re interested in becoming a driver, send an email to jonathan(at)pdxpedicab(dot)com.

Is he looking for drivers?

yeah. he is. I\’ll update the post… in the meantime, he says to email him at jonathan(at)pdxpedicab(dot)com if you\’re interested.

Hey, I saw him yesterday cranking up a hill, turn signals and all. I\’ve always wondered if this was a service that needed starting up.

Skid: The cabs are not fixies, you wouldn\’t like them.

This is really cool. I was debating if I wanted to look into riding for him on nights or weekends…

In any event – this is GREAT for Portland.

You know what else might work? A pedal shuttle between two points which are common destinations. Like perhaps Lloyd center to Convention Center. Or Covention center to downtown. Or Hawthorne to Bellmont. Or Sellwood to Westmoreland.

another great PDX local endeavor,gotta love it! I hope to see pedicabs veiwed as another \”landmark\” for Portland\’s earth friendly image as well as add another layer of Funk.

There is a pedicab service in Santa Barbara (where I grew up), and it seems to work well and be popular. It\’s mostly limited to the one main drag. But that\’s good — they are a reliable presence.

I think this is a great idea for downtown PDX.

Oooo…. nifty. I can\’t wait to see one for myself. ^_^ I think this will make downtown a more pleasant place to be.

FYI for VR: I ride all kinds of bikes with all kinds of drivetrains and stopping devices. I even put BRAKES on a Beijing rickshaw, and gears!

The first time I visited Portland, the summer of 2001, there were a number of pedicabs giving free rides at a street fair to celebrate the then-new streetcar line. When I moved here a year later, they were all gone! I\’m glad to see them coming back.

where can u buy 1 of those