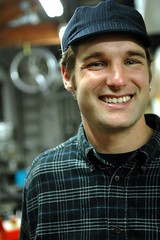 Ira, who also won the inaugural edition of the event in 2005, beat out 120 other racers for the win.

According to live audio updates provided by ultra-endurance website Ride424.com, Ira soloed for the final 12 hours of the event and was only challenged 20 miles from the finish, when he pulled away from a Polish rider on one of the final climbs. 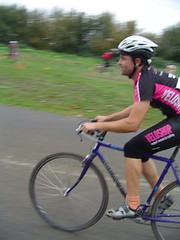 To train for the race, Ira did some epic rides from his house in North Portland. He rode at the front of the recent De Ronde van Oeste Portlandia, got lost in the steep logging roads in the hills west of Portland, and took a 165-mile jaunt to Tillamook.

Ryan’s trip to Iowa was made possible in part by donations from the community, and according to an entry in his blog before the event, his win was fueled by an iPod full of, “plenty of Cult, Van Halen, Distillers, Dee lite and Common.”

Congratulations Ira! I can’t wait to read more about it on your blog.

Check out my image archives, for more photos of Ira Ryan and his bikes.

UPDATE: Ira has updated his blog with photos and a report on his race.

“Final climbs…” I thought you wrote this was in Iowa? 🙂 No, really, congrats Ira, not many of us would dare to attempt such a race let alone try to win it. Way to go!

Congrats Ira. Just another example of how midwestern kids rock.

Congratulations Ira! I saw one of you frames outside my building downtown last week and he told me you were on your way back there for the race at the time. It is great to hear that you won it again!

Climbing in Iowa? Good one!

Congrats, Ira! Who needs blood doping European pros when we have inspiring heroes like Ira right here in our city? Cheers!