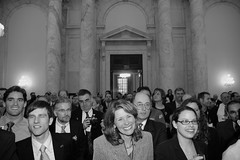 The National Bike Summit may be over, but the work has just begun.

Hundreds of advocates from around the country (430 to be exact) are now more energized, educated, and empowered than ever before to bring bikes into the mainstream consciousness of America.

For too long, the bicycling movement has assumed the role of special, minority interest group. But this year we learned that real opportunity exists in broadening our reach and our coalition to become a higher priority to the American people and to our elected officials.

To complete my special coverage of the 2007 National Bike Summit, below is a recap what I feel were this year’s main themes.

We heard this refrain from several sources. Bikes Belong Director Tim Blumenthal kicked it off in the opening plenary with,

“A lot of things are on track for us…but we need to take bicycling mainstream. What does mainstream mean? It means being part of the fabric of our communities…so when people see cyclists, they see themselves.”

Tyler Duvall, Assistant Secretary of Transportation Policy for the U.S. Department of Transportation said the way to take bikes mainstream is to focus on solutions to congestion. In his speech he said we should,

“Integrate cycling as a solution to congestion. What the public wants is performance out of the system, they don’t care how it happens.”

Capitalize on the “political climate change”
With bike-friendly power brokers at the helm or in high positions in several important, transportation-related committees, the political climate for bicycles has never been better. In his opening speech, referring to the Bike Commuter Act, Rep. Blumenauer said,

“It’s nice to be in a position where I can introduce legislation and be able to help push it through. Gas prices are up, highway spending is going bankrupt, obesity is out of control…and with Oberstar setting the agenda, I hope you’ll work with us to take advantage of this confluence of events”

David Berick from Senator Wyden’s office spoke at a panel on energy policy and said,

“For too long in this country we have focused on finding alternative sources for energy, instead of how to save it in the first place. Now, thanks to the political climate change in November, that is shifting.”

It’s up to us to find solutions
I heard from several speakers that the federal government needs creative solutions from bike advocates on how to deal with our nation’s problems. They need us to help them solve failed congestion, traffic safety, and energy policies.

Tourism will take us to a new level 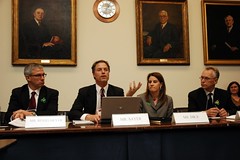 Attaching bicycle facilities to the economic engine of tourism will be a major way to move forward. Oregon led the way at this year’s Summit, but the idea is also on the mind of Congressman Peter DeFazio (who will be a key architect of the upcoming transportation bill). He called a special roundtable meeting to hear about mountain bike trails tourism, a bicycle recreation economic impact study, and plans for a new national bike route network. 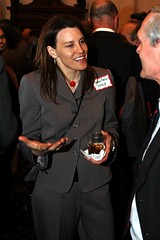 For the first time at the Summit the International Mountain Bicycle Association had an official place in the League’s national agenda. Jenn Dice, head of governmental affairs for IMBA spoke at the DeFazio roundtable and all the attendees were asked to present mountain bike issues during our meetings on Capitol Hill.

This development also underscores the importance of mountain biking to the League, reflected in the inclusion of singletrack access as a criteria for Platinum status (Portland has a long way to go on this issue).

Transportation and recreation come together 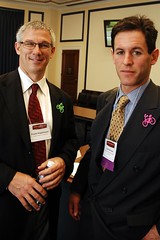 Frank Hugelmeyer of the
Outdoor Industry Association chats
with Scott Bricker of the BTA.

The injection of the mountain bicycling agenda probably ruffled some feathers of dyed-in-the-wool transportation cycling advocates. The Summit, and bike advocacy efforts in general, have historically focused on transportation infrastructure more than recreational opportunities. I think this new dialogue is healthy and imperative. We are all on two wheels and we should keep our eyes on the prize.

Take bikes beyond transportation
For years, bicycles have advocated from a transportation infrastructure perspective. Now, given what Earl Blumenauer referred to as “a confluence of issues” facing our nation, we must attach bicycling to a broader range of policies and issues. During his announcement of the Bike Commuter Act, Blumenauer said,

A presentation on challenges facing the bicycle industry by Trek Bicycle President John Burke and a discussion about Shimano’s Coasting initiative exemplify the increasingly important role the bike industry can (and should) play in getting more Americans on bikes.

I look forward to keeping tabs on how these themes develop in the coming year.

Thanks again to everyone who donated to my trip expenses. I hope you enjoyed all my coverage.