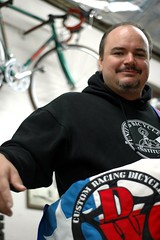 [Don Walker, during his
visit to Portland last October.]

After the possibility of the North American Handmade Bicycle Show coming to Portland fizzled out back in October, now comes word from Don Walker that he is once again considering bringing his popular show here in 2008.

He’s scheduled to discuss details of the event in a conference call next week with officials from the Portland Oregon Visitors Association, the Oregon Convention Center, the Portland Development Commission, and Commissioner Sam’s office.

Walker visited Portland last October and told me he was nearly 100% ready to bring his show here. Then out of nowhere came the big Eurobike announcement and Walker — feeling a bit blindsided by what he considers a competing show — instantly retreated.

With plans for Eurobike canceled, Don has re-evaluated the Portland option.

He has also visited and is still considering Providence, Rhode Island as a possible 2008 location, but if I was a betting man (which I’m not), I’d put my money on Portland.

I hear that Providence, RI is a dump.

That said, I’m pulling for Portland for purely selfish reasons. Thanks for the good news, Jonathan. I look forward to hearing more.

If you’re in touch with Don, you can tell him that we’re already plotting themed rides to coincide with the event should it happen.

Providence is the home of Circle A Cycles.

Nobody puts Walker in a corner!

I lived in Providence before moving here to PDX. Carl is right, Providence has a lot in common with Portland, has a great art and music scene and some interesting political history. It’s also one of the cities I’ve lived in that I’d actually consider going back to.