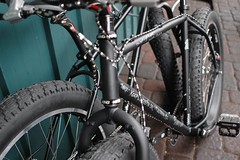 The other day I stopped into Cyclepath and noticed a unique-looking Surly Pugsley leaning against the wall.

Shop co-owner Bill Larson noticed my drooling and before I could form a sentence he was wheeling out another one just like it.

Turns out that these beauties belong to none other than Nike design legend (he did several “Air Jordans”) and current VP Tinker Hatfield.

I called Hatfield to find out more about these bikes. He said they were given to him by his Nike co-workers at a surprise party commemorating his 25th year at the company.

The one with the writing from friends and colleagues is his, the one with front basket is for his wife.

Hatfield, who has ridden RAGBRAI and Cycle Oregon several times and even raced at PIR in the early ’80s, mentioned to a friend how cool these would be on the trails near his Oregon Coast beach house.

That friend was Justin Klahn, a member of the “Footwear Innovation Kitchen” at Nike. Klahn is friends with the owners of Cyclepath and, on behalf of his co-workers, he worked with them to purchase and create the bikes.

In addition to a new paint job, other parts highlights include:

When I talked to Hatfield he was eagerly waiting out a wicked storm at his beach house,

“We’re having 60mph winds right now…I’m waiting for it to let up a bit before taking the bikes out…but it’ll be tough to wait much longer. These things are going to be a blast to ride.”

Check out a few more photos in my gallery.

I’ve had the luxury of riding one of these bikes….it was a blast on a hard surface, I can’t imagine how much fun it would be to ride on the beach. Very cool!

jerk. I want one of these!

Yeah Bill, it’d be perfect for that nice sandy beach along the Hudson ;^)

A story about some rich dude (with a beach house?!) who has super-cool spendy bikes the likes of which i will never own– unless i get a divorce and live like a monk for a few years.

I’ll bet they’ll be a blast on the beach. Lucky bastid.

Thanks for fueling the class wars, Johnathan!

Could you help me contact Tinker Hatfield or someone in his office. I have some designs for him.