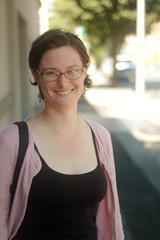 Jessica Roberts started her bike advocacy career as a volunteer stuffing envelopes for the BTA. Her dedication and smarts quickly landed her a permanent position and she was most recently the BTA’s metro area advocate.

Last week Jessica announced that she has accepted a new position with Alta Planning+Design, a local consulting firm that specializes in bicycle and pedestrian planning.

In her five years with the BTA, Jessica became not only a savvy advocate whose hands have touched numerous bits of bike-related legislation, but also a well-known face and voice of the BTA to the broader cycling community.

I’ve gained much knowledge and inspiration from seeing Jessica in action on Capitol Hill, keeping her cool in front of TV news cameras, representing the concerns of cyclists in countless meetings, and encouraging action and activism through her many contributions to blogs and email lists.

Starting September 18th, Roberts will be a planner with Alta Planning + Design, a consultant group headed up by Mia Birk (photo), former Bicycle Coordinator for the City of Portland.

What was your best and worst memory while at the BTA? 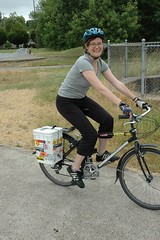 Best: Last year we passed two bills at the state Legislature, and both of them passed the Oregon State House unanimously (and by a wide majority in the Senate). When I started at the BTA over five years ago, we didn’t have that kind of clout. I’m proud that we’ve become a force to be reckoned with in Oregon, and proud of my specific role in that–I did a lot of grassroots advocacy to get cyclists from around the state to contact legislators, including leading up a volunteer team to call every BTA member in key legislative districts.

Also, back in the 2003 session, a bill was proposed to allow auto parking in bike lanes outside of schools. We put the word out and asked members to call. Within a couple of days the author of the bill called us to say that the bill had been shelved and could we please “call off the dogs”!

Worst: Hearing that ODOT decided not to restripe the St. Johns Bridge with bike lanes even though a traffic consultant’s study showed that it would only increase travel times across the bridge by a few seconds per car. That was a big hit — we knew that what we were asking for was the right thing to do and wouldn’t require a major sacrifice for motorists, yet ODOT let themselves be swayed by a few reactionary voices.

What was your greatest accomplishment at the BTA?

“I started out as the membership director and then became our metro-area advocate, so I’ve always had a very people-centric view of advocacy. I love working with and for BTA’s wonderful, generous, enthusiastic member-volunteers; it’s been such a pleasure to get to know so many cyclists and help them make a difference. I hope that work has created a strong BTA community as well as been an effective advocacy force.”

What are you looking forward to most about the new position?

“I’m excited to work with many different communities. I will see Portland’s policies and facilities in a new light every time I’m in another city or state, looking at what their situation is and how I can make it work better for bicyclists and pedestrians. My hope is that I can learn to pull out the solutions that will work best for that community (and in doing that I expect to develop a greater appreciation for the many battles we’ve already put behind us in Portland). I’ll also have the opportunity to bring back new ideas to improve our region.”

Thank you Jessica for your invaluable contributions to cycling and best of luck in your new role.

Big thank you, Jessica, and congratulations on your new job. Sad to see you leave the BTA, but totally cheering you on in your new role. May the wind be always at your back…

I’ve attended the National Bike Summit in Washington DC as part of the Oregon delegation the past two years. Watching Jessica in action at the summits has been a great pleasure. She is poised and well-spoken. Her vast knowledge of the issues and her ability to stay “on message” and clearly communicate the cycling community’s concerns and needs to congressional staffers and our elected representatives has been invaluable. I’ve learned so much from her. I’m sure she will be sorely missed at the BTA, and greatly valued at Alta. Congratulations, Jessica!

Aw, shucks…thanks, all! I’ve loved being one of the voices of the BTA to the bicycling community, and I look forward to joining you all as a volunteer.

Jessica is definitely one of the top bike advocates in the country. I am so happy she’s staying in the biking family.

The folks from around the country at ProWalk/ProBike and Thunderhead conferences I’m at this week are reiterating all of these thoughts; Jessica will be missed by the advocacy community.

We’re lucky that she’ll still be involved in the greater biking and walking community!