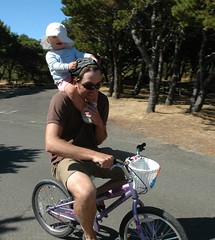 [Danica and I clowning
around at camp.]

I just got back from a weekend of camping. My family and some friends stayed in a yurt in Nehalem Bay State Park, about a half-hour south of Seaside.

I know there was a ton of bike stuff going on—from the Zoobomb Birthday to a bike move—and I’m curious how everything went. I noticed a lot of discussion about the Portland Century.

Our friend Kronda already posted her recap and photos of the ride. Feel free to share yours.

I’ve got lots of fun things to share this week, so stay tuned. Right now I’ve got to go de-sand and unpack.

Yurts are the best. Glad you got one. They seemed to be booked all the time.

i camped at nehalem bay this spring, with tiago and diogo and molly! small world.

I worked on the new Firelane 5 trail with the PUMP crew. It was really cool to work on a new mountain bike trail in Forest Park. There was a good turn-out with over 20 PUMP members and friends.

Props need to go out to all who helped make this trail happen.

The PDX Century ride was pretty good, for a first-time event… although, a few extra arrows on the course would have been nice, and having the rest areas on the same side of the road you were traveling on would have been safer.

We did the 60-mile route, the longest ride I have ever done. It was a lot of fun, and we discovered all kinds of new places to ride that we just don’t get to.

The two confusing places were where the I-84 trail dumped us off and we had to try to figure out how to get to Halsey, and where the mass of people couldn’t figure out how to turn Left on Portland… the second instance was sort of strange, as it was clear that we were all standing at the corner of Portland, and all we had to do was go left, but a bunch of people went straight instead and missed to rest stop. 🙂 We led a small pack of rag-tag cyclists to the rest stop, it was cool. 🙂

Wish I had my camera with me! 🙂 And the food at the end was yummy!

THANK ALL WHO PUT ON THE PORTLAND CENTURY. HAD A GREAT RIDE, PLENTY OF BACKUP AND REALLLLL GOOOOOD FOOOOOD. BEERS ARE COOLING IN MY REFRIGE FOR THIS EVE.

ZooBomb Biffday rocked! Two days, too many events to do them all. I was at Col. Summers most of Saturday afternoon for Harness of Doom, Rollo, Chicken Races, Whiplash, Minibike Jousting and the Derby. I’ve got cuts and bruises on both my legs from Rollo.

I missed This Race is a Pipe Bomb, but heard it rocked; I caught second run and some of the fun at Lego House on Sunday night.

Welcome back! The site was briefly mentioned in the oregonian today.

Also I want more info on how the portland century went! I hope it was a major success and something to look forward to in the years to come.

On Sunday there were TWO bike moves, a publicized and a private one. Both were well attended, and at each the food for movers was amazingly ambitious. The morning move for Chris & Jan became Shift’s first bi-directional bike move, as some movers going back for a second trip discovered some cool stuff in a “free” pile.

Something else that happened last Friday – the first ever bike tour of the Bull Run Watershed, sponsored by the Portland Water Bureau. This was a combination bike ride and educational tour of the watershed. Twenty cyclists and five Water Bureau staff rode about 25 miles through the water shed, from Bull Run Lake at elevation 3100 feet down to 600 feet at the lower end of the watershed, near the confluence of the Bull Run and Sandy Rivers. Briggy Thomas was our guide, Doug, Jim, Sarah and I provided support, Loren drove the bus, and Robert (or Richard?) helped haul all the bikes. We learned about the watershed, the history of the City’s water supply, and salmon preservation; and saw some old growth forests and beautiful views. The weather was perfect and the best thing was no traffic to deal with! Jay Graves and Jonathan Nicholas were the celebrity participants, and Jeff Smith from PDOT also came with us. Big props to Jay for fixing the squealing brakes on my Schwinn Stingray (yes, I rode a ZooBomb bike!). This could become an annual event, keep your eyes peeled for announcements of future rides.

The Portland Century was a lot of fun, just the right amount of climbing challenge out by the Sandy River and some good touring of eastside neighborhoods. The Smith and Bybee Lakes and Kelley Point Park area was a little desolate and hot. I posted a ride report and photos on my website. Enjoyed the beer at the end and taking home some Nossa Familia coffee.

Sorry I missed the bike tour of the watershed – Briggy is a great person, I’ve been on 2 (walking) tours of the watershed with her. I highly recommend it to everyone – clean water is something we take for granted, and the system is quite complex, parts of it are over 100 years old.

I had a great weekend, and ran into the Century people twice while riding through Gresham & Sandy while on my way to Government Camp. It was great being able to say for once “I’d love to be riding with you guys on the short ride today”, and then explain to the century riders that I was on my way from Milwaukie to Timberline and back. I never made Timberline, the elevation kicked my butt and I need to do some more training. I did make it to 4,200′ elevation from sea level, though, and rode 113.1 miles – a personal best.

(I also did StP this year, but as a 2-day ride, so this was my longest SINGLE ride)

I skipped the PDX Century (and will be forever grateful for that decision) and did an 85-mile ride in the other direction with 5 friends – out through Vancouver to the Washougal River Road, up to Dougan Falls and back by way of Salmon Falls, Mt. Pleasant, Belle Center and Gibson Roads. Just the right amount of climbing, a little too much heat, and that GP mill in Camas is just plain too toxic to have to ride past after you’ve already gone 65 hot miles . . .but I still highly recommend the route.

I rode the short ride of the Portland Century, and though I have the utmost hope for next year, this ride was appalingly orchestrated.

One crazy thing went wrong after another, and though I remained patient the whole hour and a half I had to stand in the “express” line to pick up my pre-registration packet, my enthusiasm dissolved throughout the day when turns weren’t marked, streets turned into gravel roads, one rest stop was off the path and completely unmarked, the temperature skyrocketed, and the printed map was frequently wrong.

I participate in several organized rides each year, from small local gatherings to big events like STP, and have never felt so embattled. To top it all off, the 40-mile route was almost 50 miles, and though I finished in good time, I felt terrible for all those people who signed up for what was billed as a ride for all skill levels. If I was a beginning cyclist and someone tacked 10 more miles onto a ride, I don’t know what I’d do.

However, I must say that I was never crowded, my fellow riders remained cheerful, and they fed us at the end. My craw was so crammed full of grilled asparagus, I couldn’t open it to complain.

The organizers have already sent out an email apologizing for the mayhem and promising better results next year. As I remain excited about the prospect of a PDX “showcase ride”, and as most of the route I took was a nice mix of flats and hills, I look forward to seeing the changes next year. Keep trying, guys and gals!