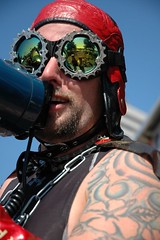 New Belgium’s Tour de Fat rolled through Portland Saturday and the crew from Fort Collins, Colorado put on one of the best bike parties of the year.

It got started with the craziest bike parade I’ve ever done (with clothes on). I have no idea where all the zany, outlandish bikes and people came from, but they showed up in force and downtown Portland will never be the same.

I heard our police escorts were a bit surprised to see so many riders. They expected 150 and closer to 400 showed up.

While staging at Salmon St. fountain I bumped into a tourist from Virginia. He was awestruck at the scene and all he could utter was, “Wow, quite an introduction to Portland.” To which I smiled proudly and said, “What, this? Happens all the time.”

It was quite a scene.

There were the usual tall bikes and small bikes. Then there were these two monstrosities with huge car racing tires and a big deck you pumped up-and-down. A few guys showed up with vintage Whizzer motorized bikes (cheating) and this guy proudly showed off his custom-made chopper.

[A fun, diverse mix of riders in the parade.] 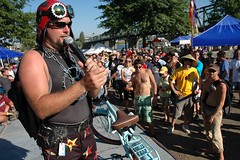 This gung-ho Zoobomber proudly pedaled his mini-tall-bike. Imagine riding down from the Zoo on that at 30+ mph!

And here’s the best-dressed rider of the day in a black top hat and suit riding a matching black lowrider cruiser. 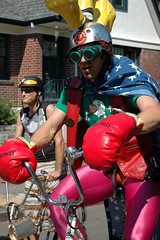 I’m not sure if it was the gorgeous sun, or the promise of beer at parade’s end, but it seemed people were just extra happy to be on their bikes. This guy was so excited he performed a banana seat bike ballet.

The hijinks continued back at Waterfront Park, where cold beer awaited parched paraders.

The crazy bike corral was a big hit. Ever ride a shoe bike? Or, how about a one-man-band bike? This odd three-wheeler takes extreme teamwork and good luck. 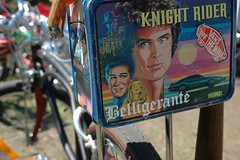 [The Belligerantes showed off
some sweet rigs]

As the temperature rose, so did the size of the crowd. I had a great time seeing so many friends from the community. Zoobomber and messenger Nerf showed up to demonstrate his new stick brake.

It was great to bump into friend of Portland cyclists Dat Nguyen. He’s fresh out of the hospital after his clavicle-breaking escapade while on a Mt. Hood bike tour last week. Get well soon Dat! 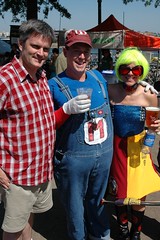 I also finally met the New Belgium crew and was glad to introduce a few of them to none other than City Commissioner Sam Adams. Here’s a shot of Sam, Meredith and Bubba. They’re hatching plans to make this event even bigger next year. Or better yet, maybe we can woo New Belgium to Portland…aren’t they considered “bicycle related industry?” 😉

Big thanks to the New Belgium crew for keepin’ it real and we’ll see you again next year.

[I took a ton of photos. Check out all 75 of them in my Tour de Fat gallery.]

This was my first Tour and we (my family and I had a blast). My only regret, is that we neglected to dress up ourselves or our bikes as we thought we were going to miss the parade altogether. We didn’t though and still enjoyed riding through town whooping it up (albeit plainly). I thought the parade would last a couple of blocks and maybe 10 -15 minutes. Man were we surprised when we finally made it back to Waterfront park an hour later!

We didn’t stay at the true festival for very long as it was hot, my kids were tired and we promised them time to play in the fountain. (I briefly saw you, and meant to say hi but didn’t as I was busy herding my 3 year old son around. (so anyway, “Hi”). We did stay long enough to enjoy a beer (my wife and I, not kids), Part of the ‘Handsome Devils’ act and of course the crazy bike corral (both my son & daughter thought the shoe bike & tractor wheeled bikes were the coolest). Anyway, what a great time. I especially enjoyed the awestruck looks on people as we went through downtown Portland. Funnier still were the people that barely noted us as if “this happens all the time”.

Good times. Thanks for the report!

“New Belgium’s Tour de Fat rolled through Portland Saturday and the crew from Boulder put on one of the best bike parties of the year.”

Boulder? I thought New Belgium is in Fort Collins, Colorado!

Thanks Shawn, I corrected that.