Portland’s bikey brain trust will have a significant presence at this year’s Pro Walk/Pro Bike conference which is being held from September 5-8 in Madison, Wisconsin.

The international conference—which was held in Portland in 1994—is considered the most important event of it’s kind and according to BikeWalk.org it attracts more than 600 bicycle and pedestrian program specialists, advocates, and government leaders committed to improving conditions for bicycling and walking. 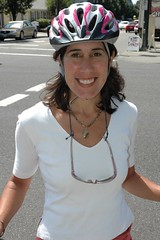 Former bicycle coordinator Mia Birk, who is now a nationally recognized bike and pedestrian planning consultant and principal of Alta Planning, will take part in two workshops including, the Economic Impact of Bicycling in Wisconsin and Portland, Oregon (read about her bicycle-related industry survey), and The Evolution of Two Walkable/Bikeable Cities: Boulder, CO and Portland, OR. 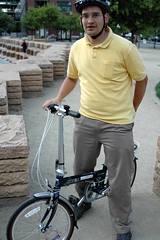 Kiran Limaye, TriMet‘s #1 bike guy will add his thoughts to the Making the Bike/Transit Connection workshop.

And let’s not forget the ever-present Todd Boulanger (seen here cruising on the Columbia). Todd officially works as a City of Vancouver (WA) transportation planner and BikeStation evangelist, but he also partners with Portland on many projects. He’ll be in a workshop titled, Car Parking: Macro and Micro Problems & Solutions and will also present his ideas on smart bike lockers in a session called, Moving from Dumb to Smart Bike Lockers (check this post for more on Todd’s smart bike lockers).

You can read full descriptions of these workshops at the event website.

Did you look at bikewalk.org’s web page? It is OUR Hawthorne Bridge!

There will be one more Portland local on the list: I will be at the conference as part of a panel session on Portland and other Oregon Safe Routes to School experiences, and I will represent Oregon in a special Safe Routes National Partnership meeting.

Jonathan – thanks for mentioning the ‘`Couv’.

For any of your readers who want to be better informed transportation advocates…ProBike is the way to go to get it. The next is to then go to Velocity.

I remember my first ProBike in 1997 – I was a bike advocate (volunteer by night) in Honolulu and it was my first professional training opportunity for bike planning at the national level. I was wowed by Michael Ronkin (and Mia too) and realized that not all DoT staff were the enemy per bikeways…as was our relationship with Hawaii DoT then.

Also Jennifer Campos, City of Vancouver – may have a poster session on developing our recent Clark County Walking Map for the ProWalk portion of ProBike. It is the 10 best urban and rural trails to walk on – phase 1 funded by our 2010 STEPS grant. (Think of it as a medical prescription for physical activity – the generous folks at Kaiser paid for the printing.)

For more information on the map:
http://www.ci.vancouver.wa.us/page.asp?menuid=10466&submenuid=22781

An on-line version of the guide is available at the Steps to a Healthier Clark County website:
http://www.stepstoahealthierclarkco.org/walkaround_guide/index.htm