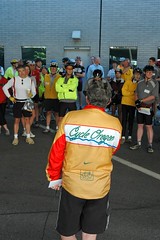 Last Friday over 100 bigwigs assembled at PDX Airport for the second annual “policymakers ride”. Organized by Cycle Oregon, the idea behind this invite-only affair was to bring together a high-powered group of bureaucrats, planners, advocates, and politicians to experience the highs and lows of our regional bikeway network first-hand.

Why is Cycle Oregon behind a ride like this?

Besides putting on their famous week-long tour each year, Cycle Oregon is working to create a statewide system of scenic bikeways. What better way to create awareness for gaps in the network (and do some lobbying) than to get all the decision makers on a beautiful ride, feed them, and give them free stuff (we got jerseys, gloves and socks from Pearl Izumi, which is owned by Vancouver-based Nautilus Inc.)?

Judging from all the smiles and handshakes I saw, it was a big success.

The ride brought some much-needed attention to the Marine Drive bikeway that runs the entire length of the Columbia River in Portland. Some parts of it are gorgeous and safe, however dangerous gaps remain. 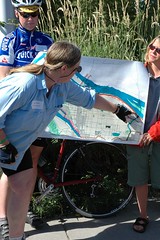 For instance, near Bridgeton Road bikes are forced onto a narrow shoulder where huge freight trucks come zooming by. Fortunately we heard from a Portland Parks planner that there’s a project in the works to connect Bridgeton Road to Interstate 5, and eventually Hayden Island.

This project is still awaiting funding but there seems to be adequate need and political support so I won’t be surprised if this happens sooner rather than later, especially if the growing community nearby throws their weight behind it.

Beyond Marine Drive we pedaled over to Smith and Bybee Lakes via the Columbia Slough and Peninsula Crossing Trails. At this point, we picked up a Vancouver contingent that included Mayor Royce Pollard. I rode with Pollard on this leg of the ride and it was great to see him on a bike. He told me he keeps one in his office at City Hall and said that “every new road in Vancouver should have a bike lane.” 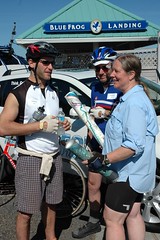 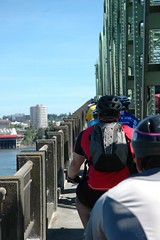 As we made our way across the Columbia on the I-5 bridge it became blatantly obvious that the current crossing is woefully inadequate for bicycles.

Later in the day, at our lunch in Esther Short Park, Mayor Pollard would confess that it was his first time crossing the bridge and that it was so narrow and dicey he was forced to pull in his bike’s rear-view mirror.

If Pollard really wants “the river to bind us not separate us,” (like he said in his speech) he and his staff should do whatever it takes to help make the crossing safer and more comfortable for bicycles.

Mayor Pollard experiencing the Columbia crossing by bicycle first-hand was precisely what this ride was all about.

Once we were finally in Vancouver it was clear that they really rolled out the red carpet. Lunch was catered by the Hilton and it was quite swanky for a bunch of sweaty people in lycra. Event emcee Jonathan Nicholas said they only asked for some energy bars and a few porta-potties and instead ended up with white linen and sushi!

After lunch the ride continued west along the river in Washington, eventually winding back to the airport where a reception awaited the group. 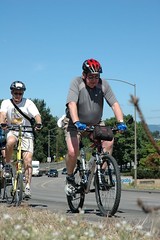 40 miles had been covered, but more importantly nearly all the region’s key decision makers now have a much better idea of the challenges and opportunities facing our bikeway network.

Big thanks to Cycle Oregon and to Mike Houck of Urban Greenspaces for their vision and hard work improve cycling conditions for all of us.

See more photos from this ride in the gallery.

I was pulling into work at the airport biking parking while they were getting ready to go. Man, I was quite put out that I was unable to join the fun.

Nice article. This was actually the second annual ride. Last year we did Portland to Champoeg park to highlight “opportunities” along the Willamete river.

I must add that while Cycle Oregon and State Parks etc. were sponsors, it was Mike Houck who was the instigator to get this ride going.

Getting the politicians and policy wonks actually out on the road where the “good, the bad and the ugly” are is hopefully an effective tool to get greater awareness and positive movement to improve the bike network.

So it was Mike’s vision and tenacity that made this happen.

I didn’t mean to leave out credit to Mike. I have edited the post to reflect his involvement.

Wow, I almost didn’t recognize Rex Burkholder with a bike helmet on. Did someone loan him one for the ride?