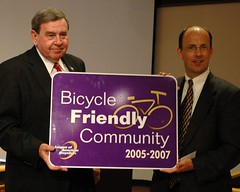 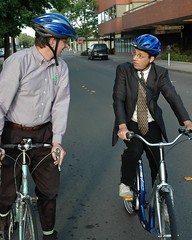 They actually earned the award last October, so last night was more of a ceremony than anything else. But regardless of that, it was an important moment in Vancouver’s journey toward bike-friendliness.

The highlight of the ceremony was when Madeleine von Laue took to the podium. Madeleine is a Vancouver resident and cyclist who is excited by the sparks of bike activism she’s seeing in Vancouver (they had 40 people at their last Critical Mass ride), but she wanted to tell the Mayor and Councilmembers that they have a long way to go. 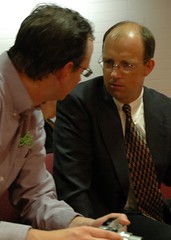 Her testimony was priceless:

“I have a bad case of Portland envy. In fact, I’m so afraid of riding near the suburban shopping centers in Vancouver that I’m tempted to do my shopping in Portland.”

This of course, really got Mayor Pollard’s attention. After all, his disdain of Portland is well-known.

After the ceremony, we rode to a brewpub to share a few pints with Andy and a some folks from Vancouver’s bike scene including; City Transportation Planners Matt Ransom and Todd Boulanger, Alex and Warren from the Vancouver CCC, and Dennis Johnson of the Vancouver Bicycle Club. 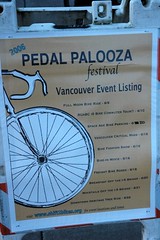 I really haven’t spent much time up in the ‘Couv, but they’re definitely showing signs of bikey life. Dedicated bicycle advocate Todd Boulanger is working very hard to spread the love up there, and his effort is paying off (more on that later).

I look forward to pedaling up that way more in the future.

[The Oregonian’s Allan Brettmann filed this report on Clarke’s visit.]

Thnaks for coming up here to Vancouver – it really IS closer to much of ‘Portland’ than downtown Portland is!