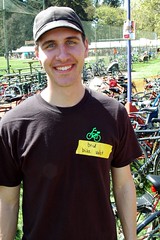 Spring is here and with it comes hordes of Portland cyclists, eager to ride without gloves and rain jackets. Saturday’s Earth Day Celebration at Sellwood Park was overrun with bikes. Luckily, volunteers from Shift to Bikes were on hand to offer free, attended bike parking.

The bike parking area was part of the Better Transportation Fair which featured lots of bikey fun. Get Lit’s Jeff Bernards was on hand giving away free bike helmets, Citybikes’ Tim Calvert was showing people how to make bike buckets, volunteer Carl Larson was manning the Shift table, and there was a place to test-ride utility and cargo bikes. 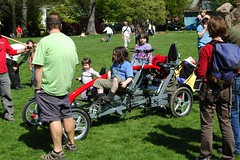 One family rolled up in this crazy, four-wheeled pedal-powered vehicle. It was made by Swiss company Z.E.M. that, according to the owner, went belly-up. Originally they sold for $10,000 but he picked this up at a “fire sale” price of $2,500. I like how they even attached a trailer to the back!.

Making an appearance astride Segways were our friends over at SK Northwest, the company that doesn’t want a bike trail on their property along the Springwater Corridor. Community bike advocate Ethan Jewett engaged their representative in a civil conversation, expressing his concern over their misguided intentions (more on those later). 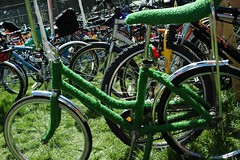 Also on hand was this magical bike fully-adorned in astroturf. I first saw this at the Bunny on a Bike Ride and I talked to the man behind the design, Dumpster Dave. He said the inspiration came from an old bike he used to have called the “Astro-glide”. 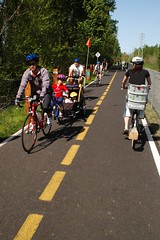 It was a great day to be on a bike, especially rolling along the Springwater Corridor Trail with hundreds of other cyclists, watching Osprey fly overhead and ringing in Spring on two wheels.

To see more from Earth Day check out my photo gallery. And don’t miss Dat’s photos either.

CONGRATS JEFF BERNARDS! Not only did Jeff give away helmets, he brought hundreds of helmets to the event and went home with just a few. Jeff was up and getting ready at 5:00 am to make it happen – thanks Jeff.

I would like to make a comment. I found the day to be amazing and full of energy. City Repair did an incredible amount of work (all voluntary) to set this up. Many bikey folks put in double shifts to keep the events going (namely Tall Steve, Jeff Bernards, Steve Kung, and a couple others).
However I was frustrated that so many desperate calls went out on the SHIFT list just days before the event begging folks to help get the bike events organized. In America’s most bike friendly city, less than 6 people did all of the bike event planning and organizing. I implore everyone who enjoyed the event to keep an ear open for help and contribute some planning time. Every little bit helps. Thanks.

Hey! That’s my family! Is that Dave pulling the tag-along pulling the double-Burley? Awesome caravan. Oh, the things that happen when I go away. I heard the event was amazing and I’m sorry I missed it.

Hey all,
I wanted to thank everyone from SHIFT who did a great job in pulling together the Earth Day Transportation Options area. I particularly wanted to thank Brian Scrivner (captainplanet!) and Aaron Ridings who helped to bring organizations to the celebration and for putting in so much time and energy.

We are planning Earth Day 2007 at Woodlawn Park and would love to have help in organizing that event. I would like to do a better job at promoting the bike rides for next year’s event to NE Portland and get more input from the bicycling community about what they would like to see at this event.

Thanks again to all who contributed in some way! Our planning essentially started in January and we are planning meetings for 2007 starting in June this year.