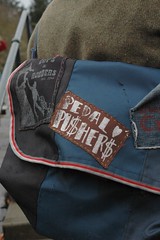 Last week I was invited to be a guest panelist for a class project on Portland’s bike culture at Lewis and Clark College. I had a good time and realized that I really love talking about Portland bike stuff…I could do it all day. I answered questions on everything from Critical Mass to bike safety. The other panelist was a guy named Kelly Rogala. Kelly is the bike fun kingpin at Lewis and Clark because he manages the “Bike Room” and he founded the Pedal Pushers, a new club on campus devoted to bike fun.

After the panel I was walking around the campus when I noticed someone with a “Pedal Pushers” patch…so I ran him down and asked a few questions. Turns out the patch belonged to a nice guy named Matt Nelson.

Matt was excited to talk about Pedal Pushers because according to him, the club is gaining a lot of momentum on campus. Matt and a friend have started a bike zine (the first issue came out on Valentine’s Day) and the club puts on an annual event called Critical Blast, which is sort of like a mini version of Pedalpalooza that features silly and creative bikey games and events.

Pedal Pushers sprung from the Bike Room Co-op that was founded just last year. You can read more about the genisis of Lewis and Clark’s emerging bike scene in this in-depth article from a recent issue of the school newspaper, the Pioneer Log.

I’m sure we’ll be hearing more from them in the future. Hey, come to think of it, they should organize a Pedalpalooza event!

do you have any information on where i can find their bike zine?

I should have some soon. Their website link doesn’t work and I don’t have contact info for any of the guys mentioned in the story…I’ve put out some emails and I’ll be in touch.

The pedal pusher’s can be reached at bikeroom@lclark.edu.
Copies of the first zine may be limited, but don’t qoute me on that.