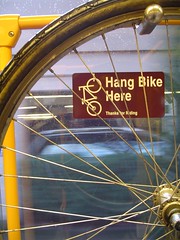 We all know the bike theft problem is bad…but it turns out even bikes hanging by the hooks on a MAX train aren’t safe. This was just posted to a local email list:

“This morning I arrived at the MAX stop just as the train was arriving so instead of locking my bike at the stop and missing the train I took it on board. Both bike hang locations were full so I sat on the seat behind the bike rack and held my bike while reading. As the train pulled out of Beaverton Creek the guy across from me jumped up saying his bike, which was hanging directly behind me, had been stolen. Apparently someone left with it at the BC stop. Everyone, including the bike owner, was reading or sleeping so no one saw who stole the bike. The owner got off at the next stop and the driver called the police to meet him there.”

I ride the MAX with my bike pretty regularly…but have never thought of locking it. Maybe I should I start?

When I’m on MAX with my bike, I watch it like a hawk everytime we come near a stop. It might make me look like a paranoid freak to other passengers, but I know who’s going near my ride.

I hope after they look at the security tapes they can ID the theif.

Whenever I take a bike on the Max, I stand with it. I’d never really thought of locking it.

I also sit or stand on the bus in eyesight of my bicycle, with a clear shot to the door. It’s a little paranoid, but standing for 10 minutes won’t kill me.

Also being paranoid in general, I lock my front wheel to the down tube when I put it on a bus rack or if I don’t feel like standing with my bike.

The one time I took my bike on MAX was an educational experience.

I would never put my bike on one of those hooks without standing right next to it, not only for the theft issue, but because of what happened to the bike on the hook across the aisle from mine. At some point, the bike got knocked off the hook, and was starting to cause problems for the people standing around it, hitting them, taking up more space than it should have been, etc. When the people standing next to it tried to call out for the owner, nobody was forthcoming, so complete strangers were needing to be responsible for the storage of the bike (but then again, it’s likely one of them accidentally knocked it off to begin with).

There’s a more logistical issue about locking your bike in transit: you only have a certain amount of time in which to get through the doors of the train, and I think a lock would slow that down immensely. During my trip on MAX, the train was crowded enough that I almost didn’t make it off in time, despite already having my bike off the hook before the stop, and despite being just across the aisle from a door.

Yeah, I always watch my bike when I put it on one of those hooks.

I always stand next to my bike. I mean really…you are sitting on it the whole time you’re pedaling to the Max; take a little break from your bumm and stretch a little.

I guess the guy will live and learn.

Like Heather, I was on a MAX where a bike hanging from the hook fell off. We were going westbound from PDX and the train was going a bit fast around a curve. The speed and curve caused the bike to fall off. Fortunately the train wasn’t crowded and the bike owner was closeby.

I stay with my bike on MAX.

There’s a flip side to this story. Per one of my bus drivers, it’s also pretty common that people forget their bikes on Tri-Met, esp. buses. A “paddy wagon” will meet the bus (or train) to take the abandoned bikes to lost and found.

The racks on Tri-Met are a very nice service, but definitely use at your own risk!

I keep an eye on my bike whenever I ride public transit. I can’t imagine it’s too difficult to steal a bike off of a bike rack on a bus or a train!

I, too, keep a paranoid eye on my bike at every stop. I don’t fear somebody taking the bike, but I do fear someone reaching in one of my bags taking a light or my bike computer.

Interesting about the hook experiences reported here. I’ve hooked my bike for over 3 years nearly every day and have never seen a bike fall off.

After hearing this story, I will probably change my ways… I take max 5 days a week and hang my bike on the morning & evening commute. My max ride is about 35 minutes and I admit that I’ve gotten very lazy (and too trusting) and don’t watch my bike regularly. I often sit with my back to my bike and have my head buried in a book. With that said, I’ve been doing this for nearly 2 years and have never had a problem, nor have I heard of a bike being stolen that way. But, after hearing this news, I will definitely be more careful.

I stand by my bike… Portland’s a great city, but you can never be too careful.

Tip: there are some seats from which you can see a reflection of the bike in the glass of the front or back cabin door. So, even though you are seated facing away (in one of the seats at the elevated level) you can still see the bike. I like to read when I’m riding the MAX, so I try to avoid having to stand with the bike. Standing in a moving vehicle is awkward.

I’m sure it helps to have a crappy used bike which doesn’t look attractive to thieves.

Also, it’s not totally uncommon for bikes to be stolen from the racks on busses, from what I hear.

I never leave my bike unattended.
Honestly, since Tri Met is cheap and runs short trains north, there isn’ even room to hold on, so I use my bike as a handle, never having to worry.
Even then I watch people like a hawk around me.
Also, A number of times my bikes have fallen off the hook, due to herky jerky driving of the train, Your bike begins to swing…. more and more. My Beautiful 91 Cannondale track bike has a dent from just such an occasion, as does my other road bike.
Tri met should definitely do a redesign, including more hooks, more effective hooks, and more cars on the trains when they know it is busy.
We need twice as many bike spots on any given train at any given time.
Once again, it is ridiculous tohave to lock your bike, so you can sit down. Stand by your bike and represent.
I have effectively used my bike and my body to block a fight on the train. I just happened to be in that spot, at that time, standing by my bike…………

Locking the bike while on MAX creates problems as you have only a little time to get it on and off the train.
On the train, I always stand by my bike and HOLD it, giving a clear message to all yes, it’s MY bike.
On the bus I sit near the front to keep an eye on things.
The only time anyone ever tried to remove my bike from the front of a bus, I immediately stood up and yelled in a loud voice for the driver to open the door. He was ruffled but did so, and I went out and shook my finger at the guy who was trying to remove my bike.

Apparently he was with his son and had waited through three busses for a completely empty rack before he decided he’d had enough and would just remove a bike so he and his son could transport their bikes together.

He yelled at me, I yelled at him and finally the driver yelled out the window that if I didn’t get back on the bus he’d take off with my bike. The guy followed me into the bus and yelled at the driver, then stormed off and waited for another bus, yelling the whole time as we pulled away. His son stood there mute, holding up both their bikes. That was four years ago and I’ve not had a problem since. But if the day ever comes that someone tries to remove my bike to steal it, that may be the last time I bring it on the bus.

In Philadelphia, they wouldn’t even try bus racks when I was a student there in 2001. Everyone I talked to insisted that the bikes wouldn’t make it five blocks before being grabbed off the bus by thieves.

i always knew my paranoia was justified.
i start freaking out if the bus gets packed and I can’t see my bus.

It is a common sense and courtesy issue. You shouldn’t have to lock your bike on MAX because you should already be there keeping an eye on it plus as others have said, it takes time and maneuvering room to lock and unlock a bike on the MAX.

Be responsible for your own actions and property and keep your eye on your bike.

Tip:
For bike swing issue on turns like the one coming in and out of the Sunset TC, I found it helful to use my helmet (straps) to secure my handlebars to the handrail on the wall next to the door.
Voila, swing is gone, although it does work best with road bars, I had more difficulty with straight Mt. bars.

I also had a long MAX commute from Lloyd Center to to Hillsboro at one time and a ride on either end. It is really easy to want to leave your bike and sit down when you’re on the train for 30min twice a day.

good tip on the helmet straps, Emily – I usually carry a bungee cord that i use to reduce the swing factor, in the manner you suggest. Unsettling to watch the bike swinging to & fro, and with the earlier posts about bikes jumping the hook, perhaps a bit hazardous.

I generally stand near my bike, and I also lash one side of the handlebars to the handrail with the velcro strap that normally secures my frame pump. But as previous comments suggest, it’d be trivial for Tri-met to add a more permanent version to prevent swinging and to slow down thieves.

While riding the bus, saw a guy put his bike on the bus front rack, and go sit in the back of the bus as it was really full. He started reading a book, and I was thinking that wasn’t a great idea. 🙁 I watch my bike like a hawk. At some point another guy got off the bus and just up and took the guys bike and rode off on it! When the bike guys stop came he got off to discover his bike was gone and FREAKED. He told the driver “why did you let someone else take my bike” course drivers says with all the folks on the bus, how would he know whose bike it was, and drivers aren’t responsible for stolen bikes.