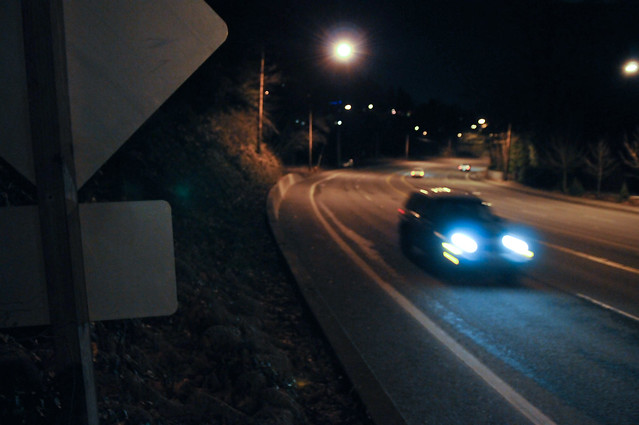 SW Barbur Boulevard: a bad street to
be drunk on by any mode.
(Photos: J.Maus/BikePortland)

This is a guest opinion piece by A.J. Zelada, a longtime biking and walking advocate who chaired the Oregon Bicycle and Pedestrian Advisory Committee from 2011 to 2013.

Intoxicating amounts of alcohol are at the death scene of 36 percent of walking fatalities and 32 percent of biking deaths.

So why does today’s street safety movement seem to trivialize it?

Last year, I listened to Oregon’s Safe Routes to School manager proclaim new safety issues to protect pedestrians. The ideas were great, but one was missing: She did not mention alcohol at death scenes. Vision Zero is being considered by many cities, including Portland and New York City, as a backbone policy for reducing road deaths. New York City’s new Vision Zero policy has one paragraph about alcohol.

It’s a sad fact that too many people are killed while walking on Portland streets. Despite having some of the safest roads in the country, we still lose too many of our fellow citizens this way. Recently, these troubling tragedies have caused advocates to sound the alarm and local electeds to use “improving pedestrian safety” as a rallying cry in their effort to raise new local transportation revenue.

Another way our city has reacted is with a new marketing campaign aimed at addressing some of the root causes of these collisions: speed and road user behavior. The other day I cam across a new promotional ad created by PBOT with the goal of getting people to slow down and be more aware when using the streets.

The main title of the piece is “Put the brakes on: This is why drivers should slow down.” The ad also shares the infamous “speed kills” graphic that lays out how an even 10 mph difference can mean life or death. The bulk of the piece focused on tips for walkers — with a list of seven tips translated into eight different languages.

Sharon White, a traffic safety specialist at PBOT who works on the High Crash Corridor program (among other things), said the “Put the brakes on Pedestrian Deaths” ad campaign is being inserted into high school newspapers. Specifically, PBOT has placed the graphic in two schools located close to SE Powell Blvd, one of the most dangerous streets in Portland: the Franklin High School Post and the Cleveland High School Clarion.