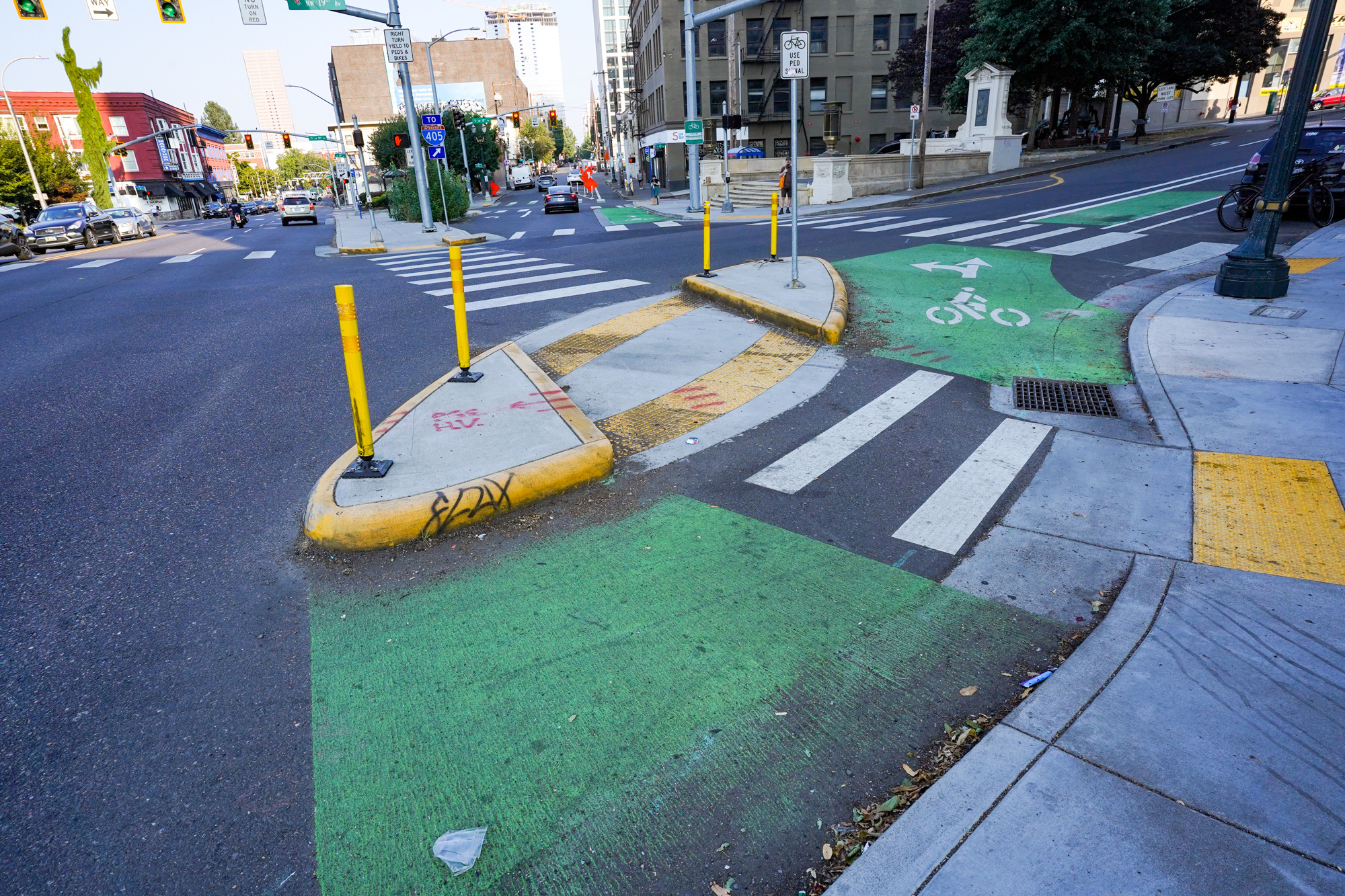 The City of Portland’s West Burnside Multimodal Project wrapped up in 2018 and I’m afraid to say after a few initial stories in 2016 we never followed up on it. So let’s remedy that, shall we?

One of the more interesting elements of the project is the protected intersection on 19th. It’s a one-way street southbound that connects folks from the Pearl District and northwest neighborhoods into the Providence Park (where the Timbers and Thorns play), Goose Hollow, and downtown area. As the Portland Bureau of Transportation has made it a better bikeway over the years, the crossing of Burnside — a busy, four-lane arterial — has become a glaring gap in their vision for a safer network.

Adding to the issues at this location is a major break in the grid with SW Alder breaking off from Burnside west of 19th at a diagonal, and with 18th curving across the arterial. There’s also a major bus line and lots of foot traffic and business driveways to deal with. Suffice it to say there’s a lot going on here.

PBOT’s method of creating some sanity at this intersection included protected bike lanes, medians, and a bunch of striping changes.

On 19th, they installed two large concrete median islands on both corners on the western end of the intersection. The idea is that bicycle users and walkers now have more protected space and shorter crossing distances at these corners where there is a high-volume of right-turning drivers and a relatively wide cross-section. They’ve also added green coloring and “cross-bike” treatments to further highlight the bikeway.

I found it to work reasonably well when I was out there a few days ago. The transition from southbound on 19th to eastbound on Alder (and the brand new bus/bike lane) wasn’t as smooth as it could have been however. There was a bit of confusion in which signal to use and with people coming off Burnside at a high rate of speed, there’s a chance for mix-ups. Overall, I like having curbs, medians, and colored bike lanes because I think it scares drivers a bit and forces them to slow down and take notice of other road users.

As I researched this post I saw that the initially preferred design (above left) from PBOT included a large grassy median space (circled) on SW Alder just east of 19th. Unfortunately that didn’t make it to the final design. I asked PBOT why. They said because SW Alder has limited right-of-way,

“The project team determined that that space was more valuable to the north given the projects goals of increasing safety and access across and along W Burnside, a High Crash Corridor. The final design enlarged and extended west the floating island between W Burnside and Alder, allowing for accessible pedestrian access to the transit stop from the west side while also permitting pedestrians to walk continuously along the south side of W Burnside without detours (which they were unable to do prior to the project).”

When I posted a video of the intersection on Instagram and Twitter, I heard from several folks who don’t think this works well. Here’s a sample of the feedback:

“I used to bike it often and really think it improved driver behavior here. Given it was retrofit the issue I’ve seen is because it’s a standard width lane many drivers think it’s a right turn lane.”

Love it :), I just wish there was signal separation, or at least a leading bike/ped interval. Ideally it would come from curbside lanes on 18/19th so there wouldn’t be an awkward shift right at the intersection.

“This is such an awful intersection, getting right hooked all the time, to me a classic example of good intentions and bad design.”

“Since it’s installation I’ve seen more people nearly get hit by right turning on to burnside cars. The angle the car now has to turn leaves the cyclist bombing down a hill to be in the vast majority of vehicles blind spot.”

“Personally, I experience some confusion there as a cyclist and delivery driver. I’ve witnessed motorists using the wrong lanes for heading south, or turning onto Alder. McDonalds feeds its post-drive-thru traffic right into it as well. As stated above, it’s green and a bike lane so I’ll take it over nothing, but regardless of my transportation mode I approach it with some trepidation.”