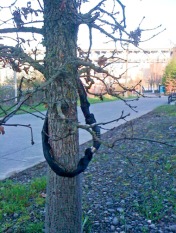 Did this lock belong to Tyler Brady?
(Photos by Dan Schafer)

Several local media outlets are reporting that the autopsy results of 22-year old Tyler Brady showed that he died of an accidental drowning. Brady was reported missing on February 27th, was last seen riding his bicycle in Southeast Portland, and his body was found in the Willamette River near OMSI yesterday.

The news of Brady’s accidental death came as I was working on a story speculating about the same scenario — that he accidentally fell into the river and drowned. This speculation began with a comment left yesterday on this site that bicycle matching the description of Brady’s had been locked to a tree just upriver from where his body was found. 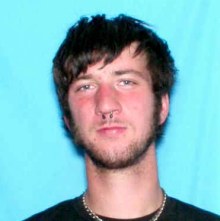 A body pulled from the Willamette River near the Oregon Museum of Science and Industry today has been identified as 22-year old Tyler Brady. Brady, who was last seen riding his bicycle in Southeast Portland, was reported missing on February 27th.

On Monday, the Police released the last known images of Brady and he was seen on his bike near a local Safeway supermarket.