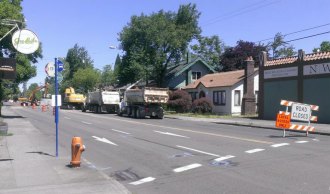 Cesar Chavez is closed for the next 21 days.
(Photo: Joe Bike)

A City of Portland sewer project has led to the closure of SE Cesar Chavez Blvd (39th). The street is closed from Hawthorne to Division 24/7 beginning today through July 18th.

Cesar Chavez is a high-volume arterial for people who drive through the area and the City has signed detours that direct drivers to SE 30th and 50th avenues. However, we’re already getting reports that many people are driving on SE 41st and 34th, both of which are popular streets for bicycling. Sharon Martell shared with us via Twitter that people riding bikes should be especially careful on 41st and that “most cars are diverting there.” Teri Solow added that there are also a “bunch more cars on 34th”.

As part of their federal stimulus funded project to install overhead lighting on the I-205 non-motorized corridor, ODOT is planning to close sections of the of the popular biking thoroughfare from October 18th through early-mid January. See the press release below for details and stay tuned to ODOT’s I-205 website for updates:

Portions of I-205 path to temporarily close

Path users can expect detours between Clackamas and Gladstone during construction

As part of a project to install overhead lighting on the I-205 Multi-Use Path, contractor Stacy and Witbeck, Inc. will temporarily close portions of the path between Clackamas and Gladstone beginning next week.

From the Bureau of Transportation:

The Portland Bureau of Transportation will be reconstructing SE Hawthorne Boulevard and SE Madison Street between SE Grand and SE 12th beginning Sunday night. The general public should expect delays in the area due to lane closures.

The street surfaces will be ground down and repaved over the next three weeks. Travelers should expect rough surfaces and use caution in the work zone. The bicycle lanes on SE Hawthorne and SE Madison will be removed during construction. Bicycles will be sharing wider outside lanes with motorized vehicles. Sidewalks will remain open.

The majority of reconstruction work will occur between 6 p.m. and 7 a.m. to minimize impact to motorists and cyclists. More information can be found at www.keepportlandmoving.org.