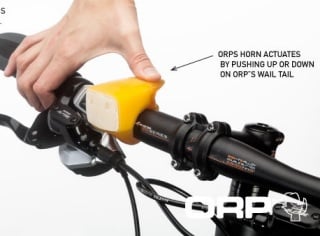 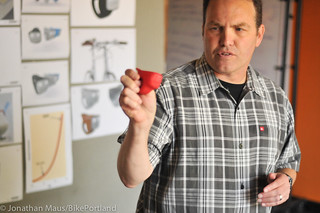 Many people ride with bike bells; but the truth is, in the midst of traffic they are not nearly loud enough to be heard inside the cabin of a car or truck. That’s a problem that Toren Orzeck of Fuse, a product design firm located in southeast Portland, wanted to fix. “I’m not the best biker,” he said when I met him at his shop back in September, “but I love to solve problems.”

The “Orp” — which went live on Kickstarter today — is Orzeck’s solution. Orzeck is a former designer for GE Plastics and Nike whose brain seems to never stop working. He started thinking about the bike horn idea after the tragic, right-hook deaths of Tracey Sparling and Brett Jarolimek in October 2007. He felt an even greater urgency to solve this problem when, in summer of 2008, the gas-price induced bike boom got him and his employees on their bikes.

“I thought, there’s got to be a way to make bikes more visible — or maybe more hearable.”