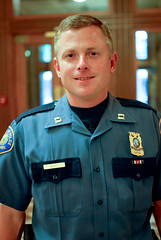 Todd Wyatt is the new captain of the Portland Police Bureau’s Traffic Division. Wyatt, 41, takes over the position from Eric Hendricks who held the position for just 13 months before being reassigned to a job in the Chief’s office.

Wyatt comes to Traffic from his previous post as Captain of the PPB’s Records Division. He held several administrative positions after serving as a beat cop in various precincts throughout the city for nearly two decades.

Wyatt lives with his family in Southwest Portland. He attended last night’s City of Portland Bicycle Advisory Committee, a practice his predecessors have made a priority. During a brief chat at that meeting, I learned that he’s no stranger to area bikeways. He said his family of four has six bikes and they take regular rides on the Waterfront and the Springwater Trail. Wyatt says he “dabbles” in biking (“When I ride with my friends who ride all the time I can barely keep up”) and also does a lot of kayaking on the Willamette.