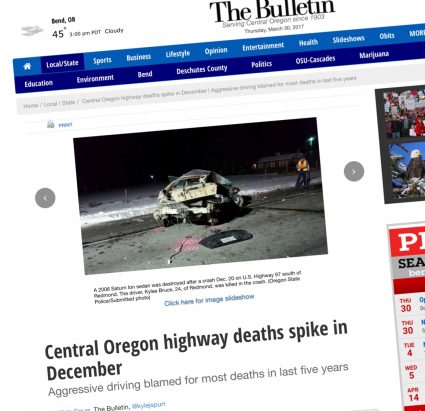 How desperate are Oregonians for safer roads?

People in the central Oregon district of State Senator Tim Knopp were so distraught by a spate of fatal and serious injury collisions late last year, they worked with him to introduce a bill that would create a State Transportation Donation Fund. Senate Bill 798 had its first hearing on March 20th and it passed through the Senate Committee On Business and Transportation.

Senator Knopp, whose district includes the cities of Bend, Sunriver and Redmond, testified in favor of the bill at that hearing. “During an 11-day period last December we had 10 fatalities,” he shared. “It was unbelievable. There was a father and a son, a pregnant woman, two Portland physics professors… It seemed quite hopeless, almost daily… You’re kind of wondering, ‘What is going on? What can we do? Is there a solution to this?'”