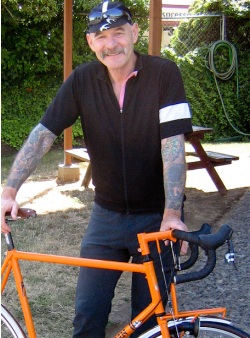 Steve Gitchell, a man well-known locally for his friendly demeanor and love of riding bikes, passed away on January 15th. According to the Oregon Herald, he was found in his home in Newberg by a neighbor and his death is believed to have been from natural causes. I didn’t know Steve personally, but I distinctly remember his on-the-bike style, his classy, long mustache, and his gorgeous Pereira Cycles randonneuring bike. He was 64 years old.

Portland resident Theo Elliot counted Steve as a friend and shared memories and photos of him on Flickr. Theo met him three years ago on the train en route to a Oregon Randonneurs event. It was a 200 km brevet, Theo recalled, which is short by randonneuring standards. “He would tell me,” Theo recalled on the phone today, “That he’s too old to have to prove himself on 600 km events.”

Many people knew Steve for his two bikes; an orange Ira Ryan and his Pereira. According to Theo, Steve was an Oregon native who lived in northwest Portland until moving to small house in Newberg a few months ago. “He wanted to live in the country,” Theo said.