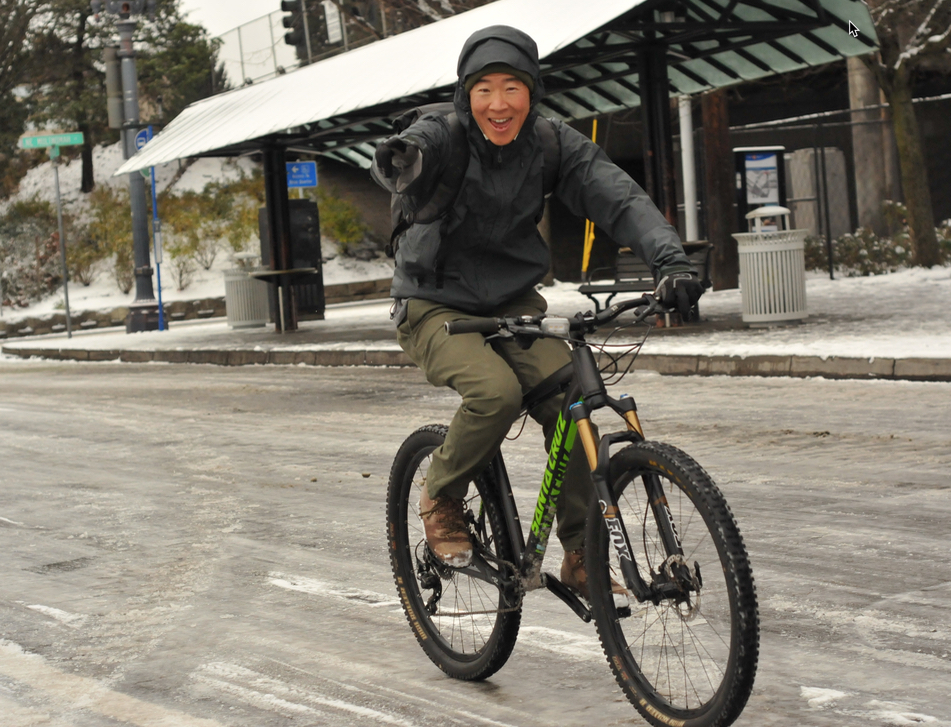 Portland is still covered in a layer of snow after a storm last night.

If you can manage it, the biking is quite nice. Roads are much quieter than usual because people are driving slower and schools and many businesses are closed. 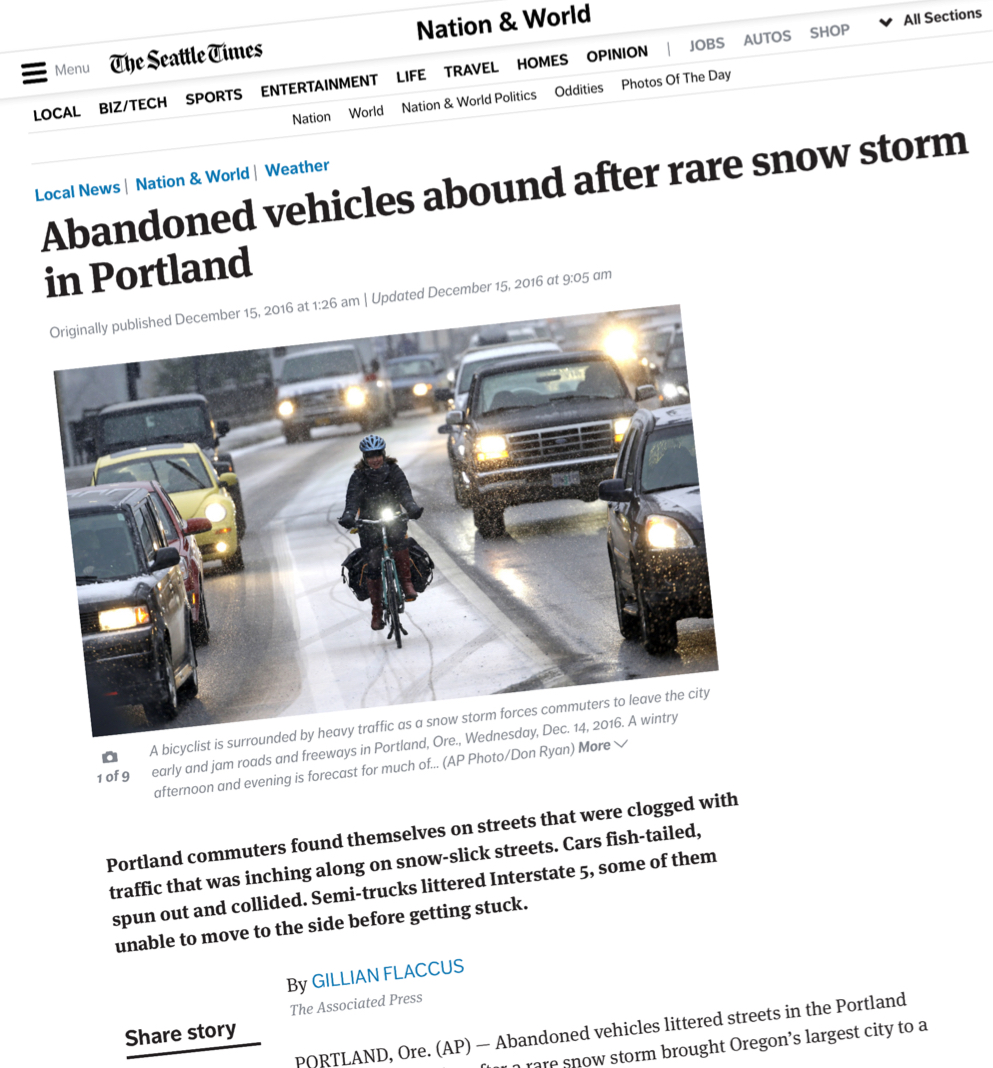 Welcome to the morning after.

After a few inches of snow fell on Wednesday afternoon, our region’s transportation system ground to a halt. Major freeways, arterials, and even many neighborhood streets were either completely gridlocked or impassable due to abandoned cars left in scrap heaps of twisted metal and broken dreams. Thousands of people were stranded for hours and backups continued on Highway 26 until midnight (midnight!). Thanks to an Associated Press story, the insanity of it all has brought us national attention.

Now we’ve entered the autopsy stage where everyone is trying to figure out how it happened.

The Oregonian broke it down to five reasons: We don’t use salt on our roads; people don’t carry chains; people don’t know how to drive in the snow; Portland doesn’t have enough snow plows, and transit is, “not equipped for hilly Portland.”

Sigh. Of course they forgot to mention something.

Here’s the inconvenient truth: Our over-reliance on single-occupancy motor vehicle use has real consequences. It leads to lots of injuries and deaths, it poisons our lungs, and it makes our transportation system extremely fragile and inefficient. 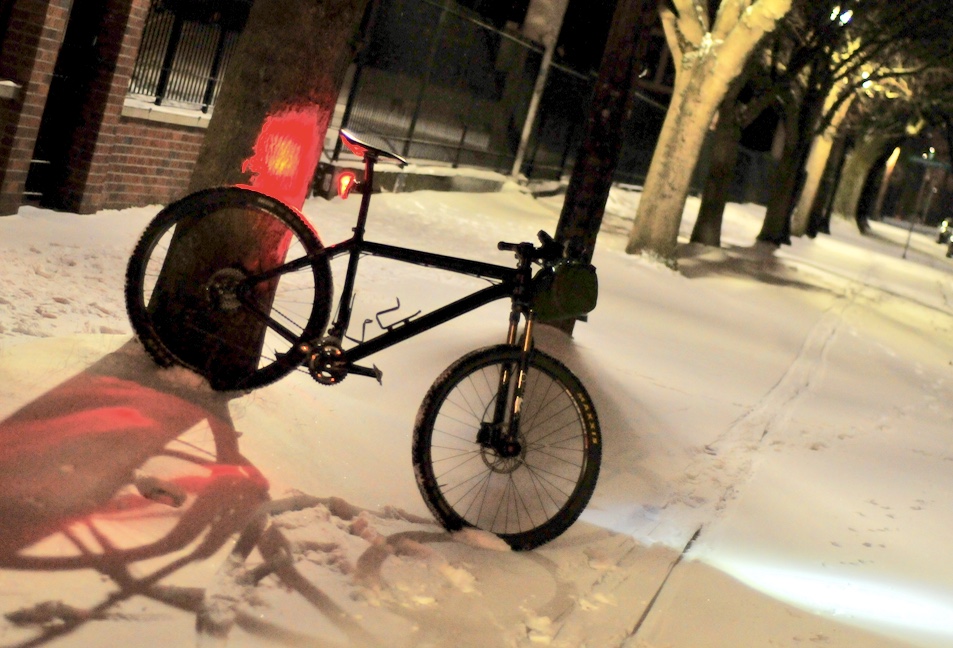 I have never seen anything like what happened on tonight’s evening commute. A few inches of snow has led to utter chaos on roads throughout the Portland region.

Schoolkids trapped in buses until way past their bed times, multiple car pile-ups, dozens of cars just abandoned on the side of the road, people hitch-hiking or giving up on their cars and walking several miles to get home, standstill traffic on I-5 and Highway 26, five to seven hour commutes with people passing out survival snacks to strangers. You know those traffic maps news stations show every night? Almost every major highway was deep red until about 10:00 pm. Like a traffic blood bath.

My social media timelines were an amazing contrast — full of complete and utter misery for people inside motor vehicles, and then sheer joy and glee from people who were lucky enough to be on a bike. 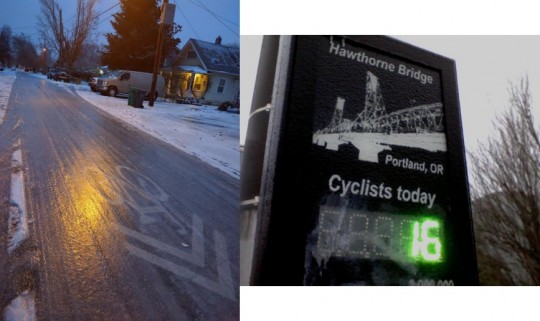 Side streets are sheeted with ice. And just 16 people had crossed the Hawthorne as of 8:45 am.
(Photos: Mitch Lomacz (L) and Mark S. (R))

When I saw the weather was snowy this morning I tortured my indoor-only kitties and then geared up to go bicycling with my cycling friend Jeremy, aka @kitchen.

We met down by Voodoo donuts. The lack of a line meant we actually went in to buy a few to fuel ourselves. I had a tiny cruller but Jeremy went for one of the largest donuts they have. 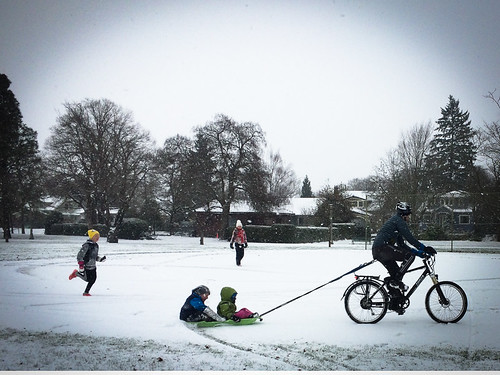 Portlanders woke up to the first real snowfall of the season this morning. The white powdery stuff was sticking to streets and beckoning us out into before most of us had finished our first cup of coffee.