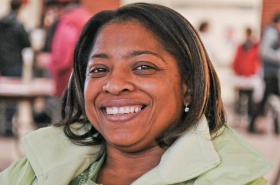 Sharon Maxwell at an open house for the
Williams Avenue Traffic Safety and Operations
Project in April 2011.
(Photo by J. Maus/BikePortland)

Sharon Maxwell, the latest challenger to Commissioner Nick Fish’s seat on Portland City Council, might be a familiar name to many BikePortland readers. Maxwell spoke up early and often during the public process to update the design of North Williams Avenue.

For those who don’t remember, the City of Portland’s North Williams Avenue Traffic Safety and Operations Project began as just another transportation project, but ended up as a citywide conversation on bicycling, race, and gentrification. The project became a case study for urban planners, garnered national media attention, and became the subject of academic research.