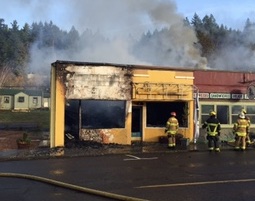 Planet X was on the left.
(Photos: Vincent Rodarte)

A fire in Oakridge early this past Sunday morning has completely destroyed the headquarters of Planet-X USA. The company sells bikes under the Planet-X, On-One and Titus brand names and is owned by its parent company which is based in Sheffield, England. Vincent Rodarte, the company’s operations manager, moved the business to the mountain biking mecca of Oakridge on August 1st of this year. Planet-X USA opened in Portland in 2011 and expanded significanly in 2013.

Planet-X’s Portland location had 10,000 square feet (we visited them back in 2013), but much of that inventory had been crammed into the 1,200 square foot showroom and office in Oakridge. Fortunately the company is insured against fire, but it’s a huge blow to Rodarte and his effort to strengthen the U.S. business.

Rodarte, who lives in Portland, just published photos of the damage and his thoughts about the fire at ORBike.com: 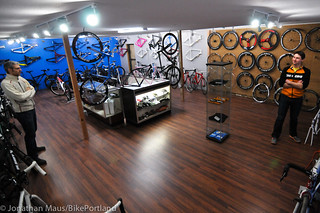 Thieves hit the showroom and offices of Planet X USA on northeast Hancock Street. According to employee Vincent Rodarte, the break-in occurred sometime between 6:30 pm on Friday (1/10) and 3:00 pm on Saturday. The stolen items include frames and complete bikes valued at over $11,000, about $70 in cash, a handful of headsets and other accessories, and a Fuji digital camera.

Rodarte says the thieves ransacked all the cabinets and somehow got away without tripping the alarm.

Below are photos and specs on the stolen bikes: 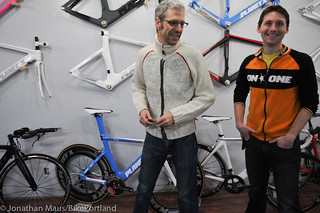 In the last year-and-a-half, Planet X USA, has gone from boxes of bike frames stacked inside a skateboard half-pipe, to a 10,000 square foot warehouse with offices, a retail showroom, and $1 million in revenue. That’s a promising trajectory, and it shows that the future looks bright for the Portland-based arm of Planet X, a major bike brand founded in England over twenty years ago that has set up its North American headquarters on NE Hancock Street. Planet X is known for their online, consumer-direct business model, high-end triathlon bikes, private-labeled wheelsets and other components. The company also owns On-One and Titus Cycles, two brands with deep roots in the mountain bike world.

I visited their new space last week to see how they’re settling in.