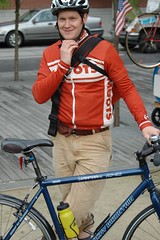 Paul Van Orden is running for Multnomah County Commissioner Seat #2 (North and Northeast Portland district). Van Orden is a political neophyte but he’s no stranger to community organizing and working in the public policy realm. As someone who I’ve noticed at many bike events through the years and who has garnered a lot of support from bike shop owners, bike advocates, and other in our community who care about biking, I figured I’d share a bit more about him here on the Front Page.

Van Orden is currently employed by the City of Portland as a Noise Control Officer. Acting more in a volunteer capacity than in an official City role, Van Orden organized a bike ride leaving the final screening at Filmed By Bike’s recent opening night. That street party has gotten complaints from nearby residents and Van Orden wanted to encourage folks to leave the area and take the party elsewhere.