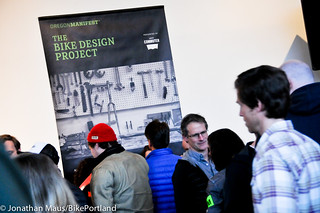 And this year, the stakes are higher than ever. As announced by Holt last night, the winner of the Bike Design Project will see their creation turned into a full-fledged production model manufactured by Fuji Bikes. The company has committed to make 100 bikes and the winning model (after it’s been value-engineered to a lower price-point than a one-off, custom bike) will be available in select bike shops in 2015.

“It’s important to go from ideation to production,” Holt told me last night. “Our role is to be an outside catalyst for the industry and to fulfill that we had to have manufacturing.”