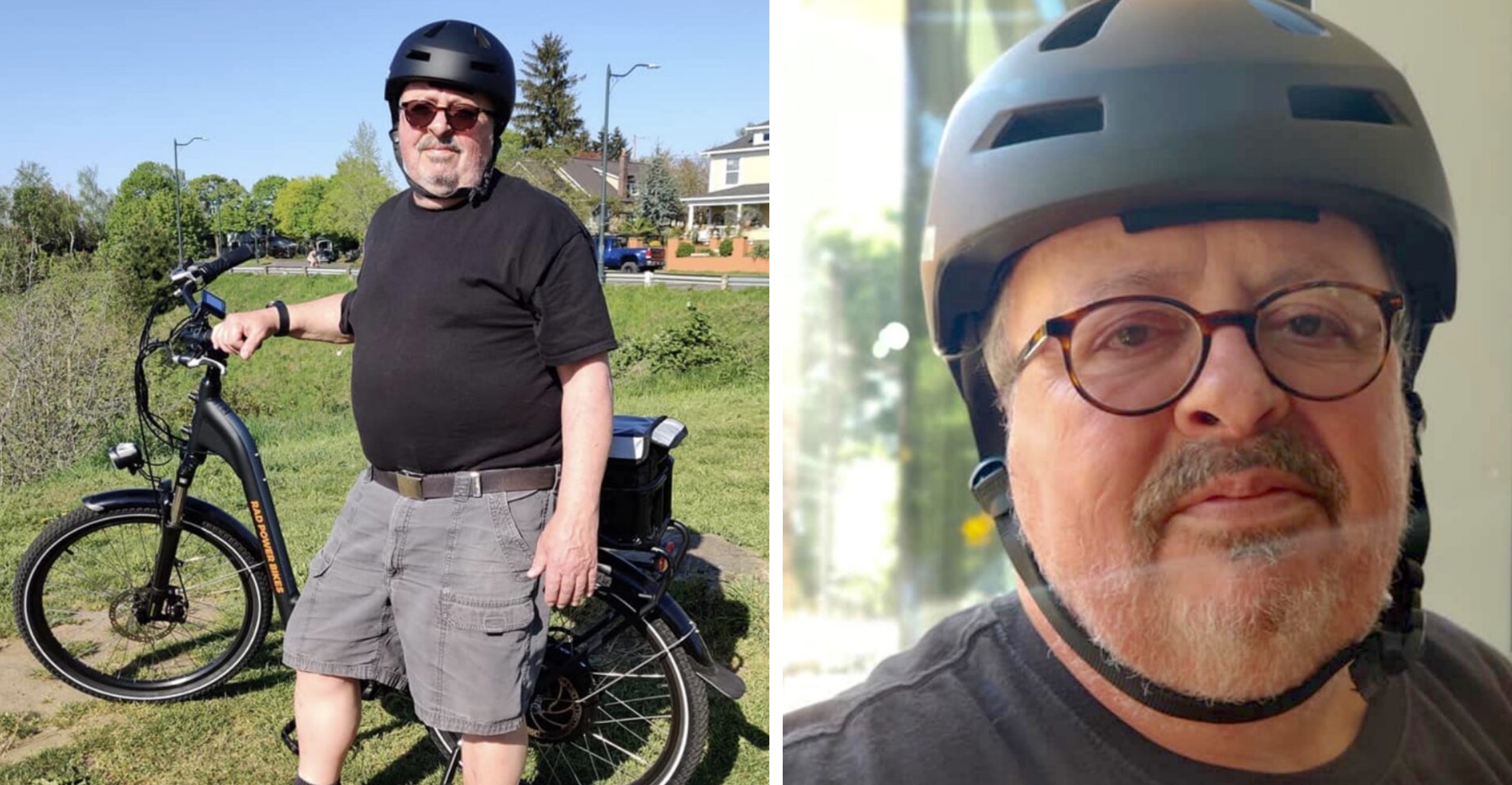 Portland Police released the name of the man who was killed while riding his bike in the Portsmouth neighborhood on July 10th. It was Martin Crommie. He was 70 years young and full of life, according to friends and his brother who I spoke to this morning.

Daniel Crommie shared that Martin lived just 200 feet away from the collision that ended his life. He was about to make a turn onto North Juneau Street — where he’d lived for 32 years — when, for some reason, he collided with a person driving a 2021 Toyota Tacoma truck.

Martin was returning home from hanging out with his brother all afternoon. They met up in southeast with their bikes (Martin put his on MAX for part of the trip, Daniel put his on a bus) for burgers and beers. “We’d always go out and enjoy biking and just having a day together. We’ve been doing that for years. We weren’t just brothers, we were best friends too, we were very close and did a lot of adventures together.”

Daniel said he visited the intersection of North Chautauqua and Juneau the day after the collision. “We saw the marks on the ground [from the police investigation] and he was still in his lane when he got hit. The truck driver was passing him on his left,” Daniel shared. “The truck driver reported [Martin] was swerving in front of him, which was just his way of saying ‘don’t pass me’. He hated people riding on his ass while he biked.”

It’s hard to know exactly what happened because we can’t ask Martin about it. Daniel acknowledges it was just an “accident”, but he also said, “The truck driver was just one block from Columbia. If he’d been patient and waited 15-20 seconds, there would be no accident.”

Below is a short video from the intersection:

Martin loved his e-bike, which he purchased about a year ago. He and his brother would do summer bike trips on bikes together even before he got it. Daniel said Martin got an e-bike because he was on his feet all day at his job (a contractor for Intel) and it was getting hard for him to power his other bike.

Daniel is one of Martin’s two brothers. He leaves behind another brother named Jay, his sister Judy and other extended family members who grew up together in southwest Portland.

When he wasn’t working on spending time with family, Martin loved to be in the outdoors hiking and camping. He was a news junkie who loved following national politics.

“He was probably one of the most compassionate and accommodating people I’ve ever known,” Daniel said, when I asked what he wants the community to know about his brother. “He was the kind of person that, if there was someone downtown that looked destitute asking for money, he’d give them money.  He was very sympathetic. Generally just a kind-hearted person who sometimes would say the wrong thing at the wrong time, but that was part of his charm.” 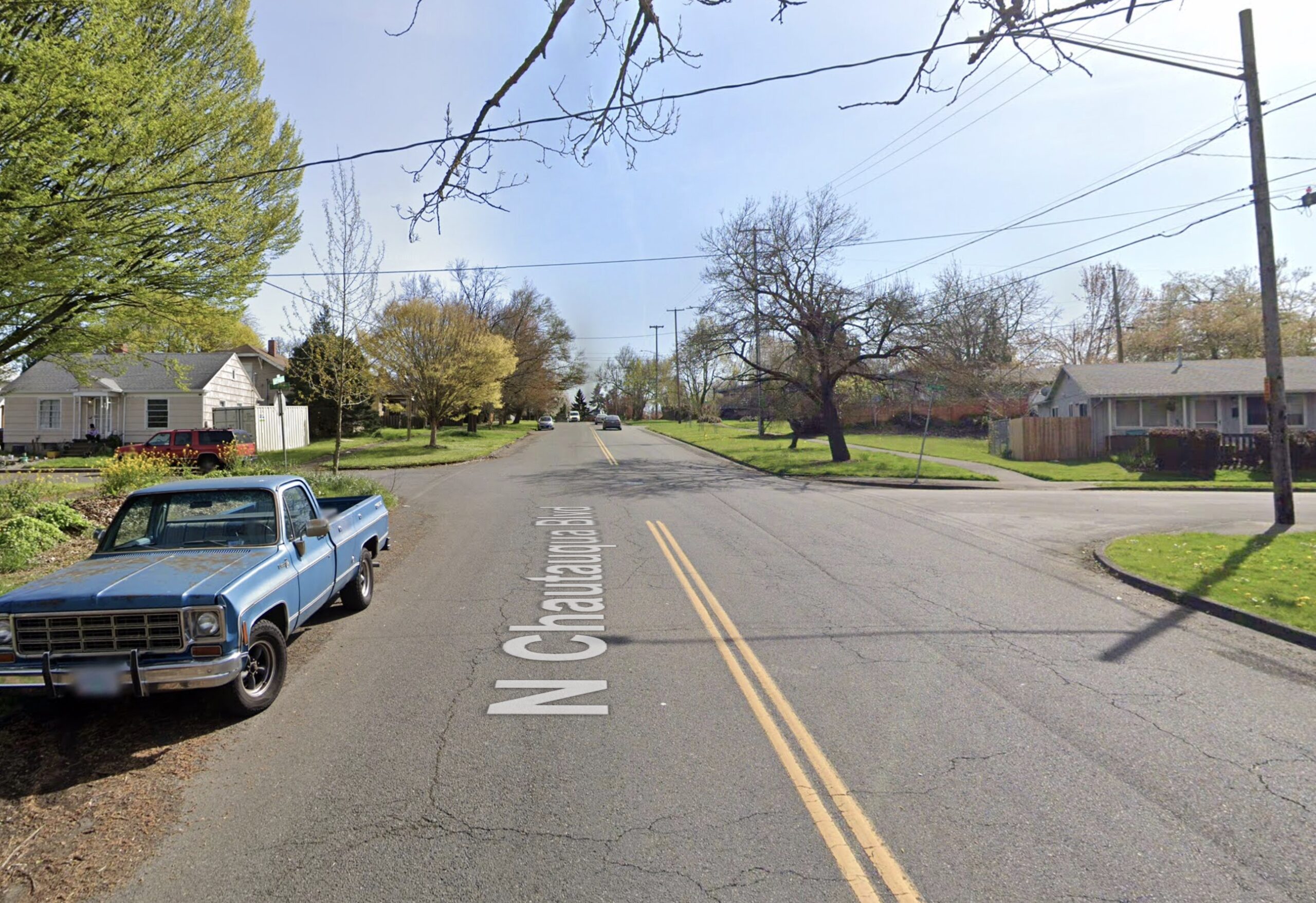 The Portland Police Bureau says someone riding a bicycle was killed late Sunday night in the Portsmouth neighborhood.

Not much information has been released thus far, but a PPB statement says they responded to a crash at around 10:15 pm last night after a report of a crash between a car and bicycle user at the intersection of N Juneau Street and N Chautauqua Blvd. The bicycle rider died at the scene and the driver remained at the scene for questioning.

The crash is being investigated. If you saw or heard anything about what happened please let us know and contact the PPB Traffic Investigations Unit at crimetips@portlandoregon.gov or (503) 823-2103. This is case number 22-184939.

The location of this crash was just one block south of Columbia Boulevard, a major arterial with a 40 mph speed limit. From a screengrab of a a KGW-TV story sent to us by a reader (right), we can see that the victim’s bicycle came to rest in the middle of the intersection. We don’t yet know what direction the two parties were going prior to the collision, but it’s worth noting that there’s a significant elevation rise on Chautauqua between Columbia and Juneau. If you are going south from Columbia, the uphill makes visibility poor as you approach Juneau.

Chautauqua is a neighborhood collector street with a 25 mph speed limit. It does not have a bike lane but due to its low traffic volume it’s listed on the Metro Bike There map as a “Bike Friendly Street”. Chautauqua is an important street in the bike network because it connects directly to a bike path along Columbia Blvd, churches, Charles Jordan Community Center, Columbia Pool, and so on. It also connects to the major bikeway on Willamette Blvd at its southern end.

There is a lot of advocacy going right now on to make this part of Portland better for bicycling. The Portland Bureau of Transportation’s North Portland in Motion plan released its first report back in December and project staff will lead a bike ride of the area on July 30th.

This is the second bicycle fatality and the 31st traffic death overall in Portland this year.

The bicyclist involved in this crash has been identified as 70-year-old Martin Crommie. His family has been notified of his death.