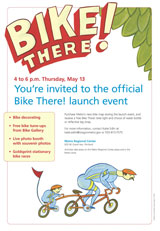 Today is the official launch celebration of the new edition of Bike There!, Metro’s regional map publication. This very useful resource was last published in 2007 and the new 8th edition includes broader regional coverage along with edits necessitated by our constantly evolving infrastructure.

You can purchase your copy at this afternoon’s festivities for $9.00 and pick up a free light, water bottle or reflective leg strap courtesy of Metro. There will be other bike oriented activities as well including tune-ups from Bike Gallery. Read all the event details and head over to Metro Regional Center today between 4:00pm-6:00pm. 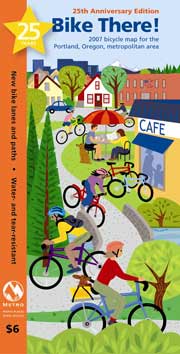 Metro’s excellent Bike There! map is set for its first major update since 2007.

Metro’s project manager and cartographer for the update, Matthew Hampton, checked in with us last week to share more about what’s in store. Hampton created the last two versions of the map and says he and his team have input all the public feedback they’ve received since its last printing in 2007.

In addition to reflecting public feedback, Hampton says the 2010 version will have greater regional coverage (out to riding areas in Hagg Lake and Dodge Park), an “improved array of detailed subarea maps that show parks and local bike paths,” and many other improvements.

The updated map will also show things in the bike network like cycle tracks and buffered bike lanes. It will also list the many new bike shops that have sprung up in the last three years.