[This is the second (and final) part of our In-Depth report by Libby Tucker on how bikes fit into Portland’s streetcar plans. Read the first installment here.]

Yesterday, we left off with a discussion about bikeway and streetcar track design in the Pearl District. Mia Birk, a former bike coordinator for the City of Portland and now a consultant on Portland’s streetcar plans, continues our story… 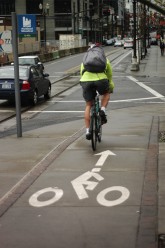 On NW Lovejoy, bike traffic is
routed up onto the sidewalk
to get around the streetcar
platform. (Photos © J. Maus)

The Lovejoy design (see photo at right) creates a “very uncomfortable situation for most bicyclists,” added Birk. “It feels really weird to go up on the sidewalk and blast through a pedestrian zone, and when you’re on the street you have to cross tracks at a bad angle.”

This time, Alta (the planning firm where Birk is a principal) has completely redesigned the Pearl District’s bike facilities in the area surrounding the streetcar tracks, starting with the removal of the bike lane on Lovejoy. Instead, the streetcar plan would convert Lovejoy and Northrup into a one-way couplet for cars and reroute bike traffic onto a bike boulevard along Northwest Marshall. The cobblestone street would be smoothed out to accommodate bikes and would include new bike signals and bike boxes along the route.

[Editor’s note: This is the first article in our new section, BikePortland.org: In-Depth.

The main contributor to this section will be Libby Tucker. Ms. Tucker is a freelance reporter whose articles have been published in a myriad of outlets including the Associated Press, MSNBC.com, The Oregonian, and others. She was most recently a staff writer for the Daily Journal of Commerce where she covered transportation, construction and energy. She is also the author of the blog, Naked Energy.

In this article, Ms. Tucker takes a closer look at how bikes figure into Governor Kulongoski’s 2009 plans.]