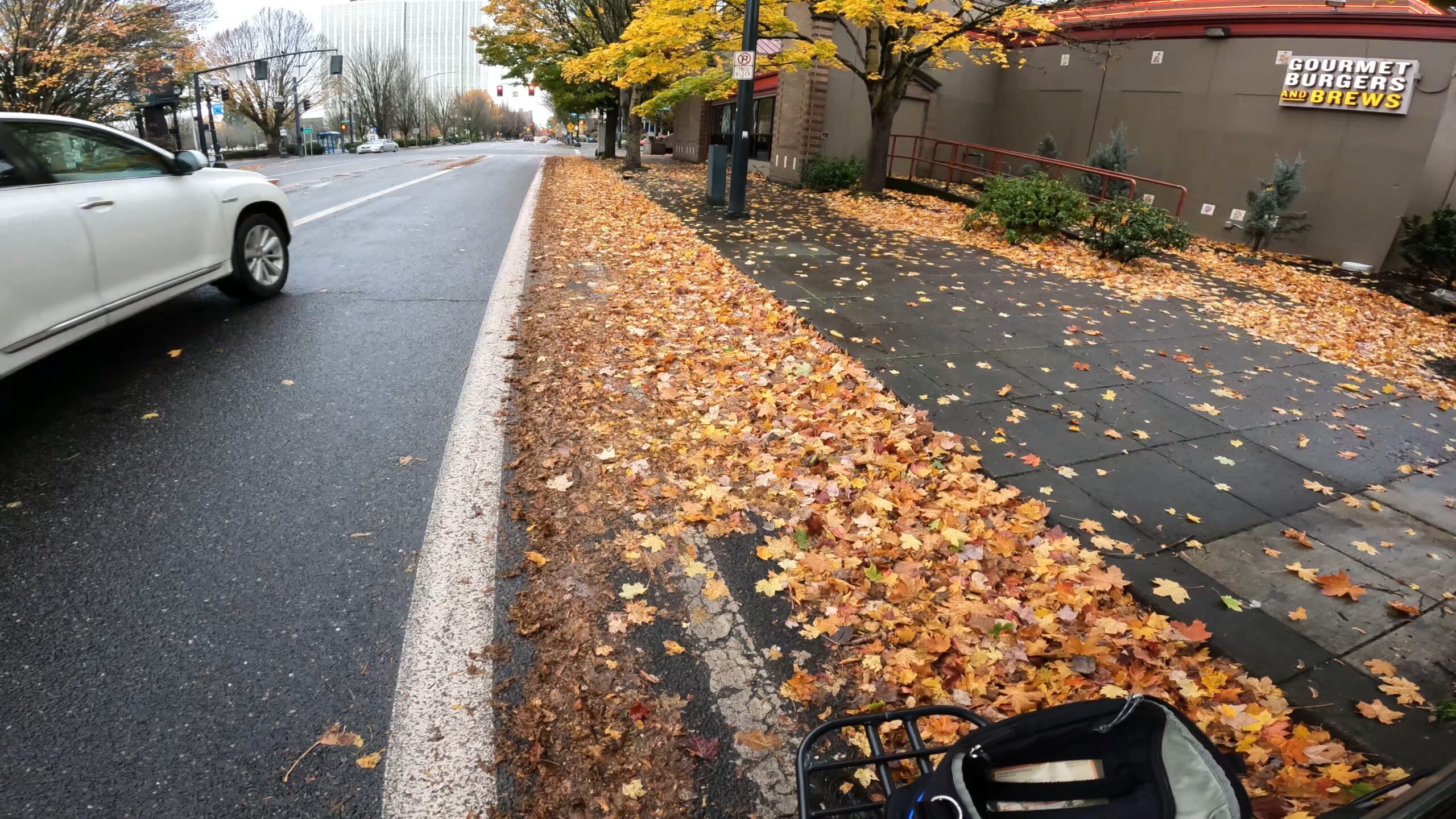 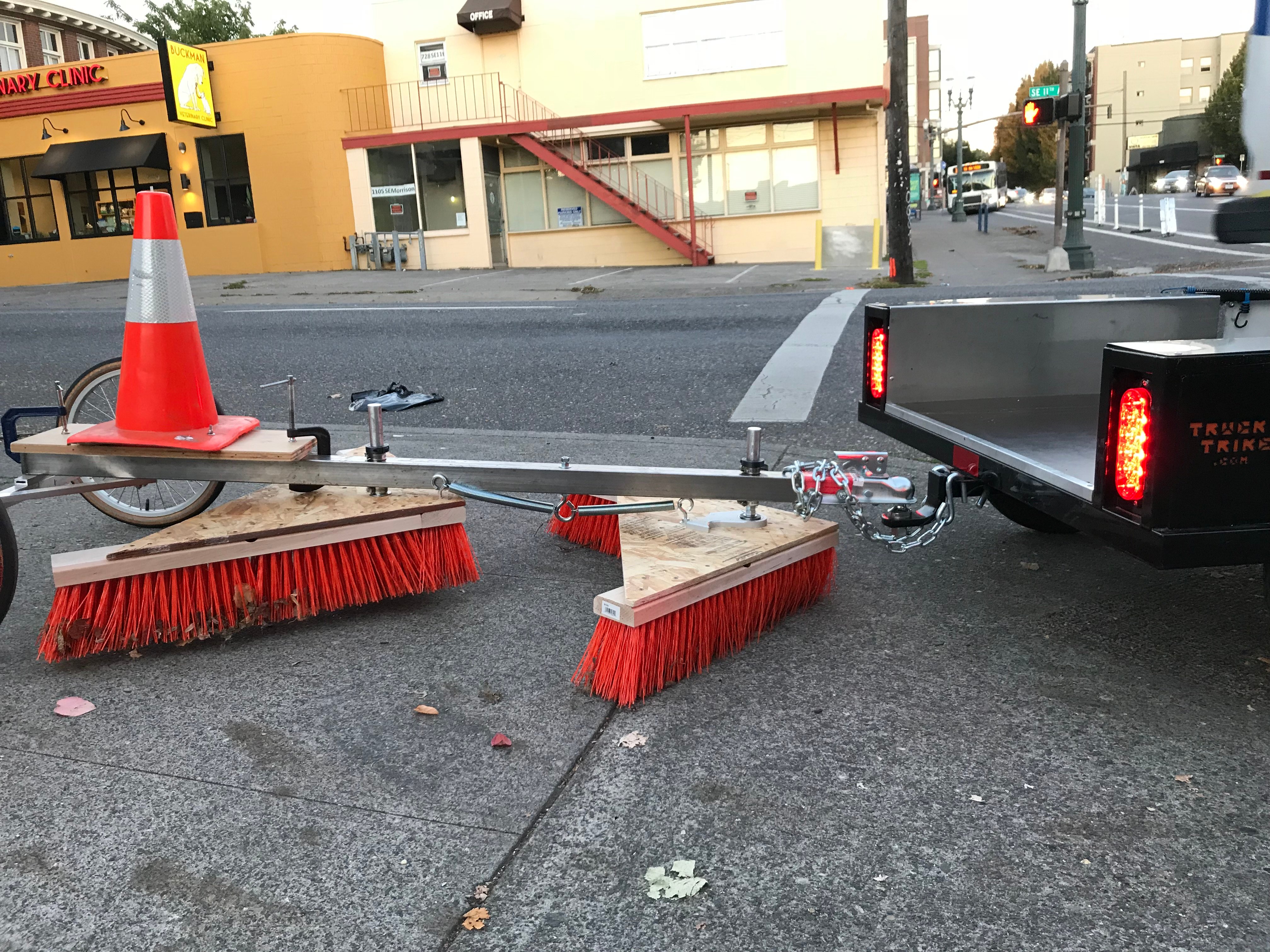 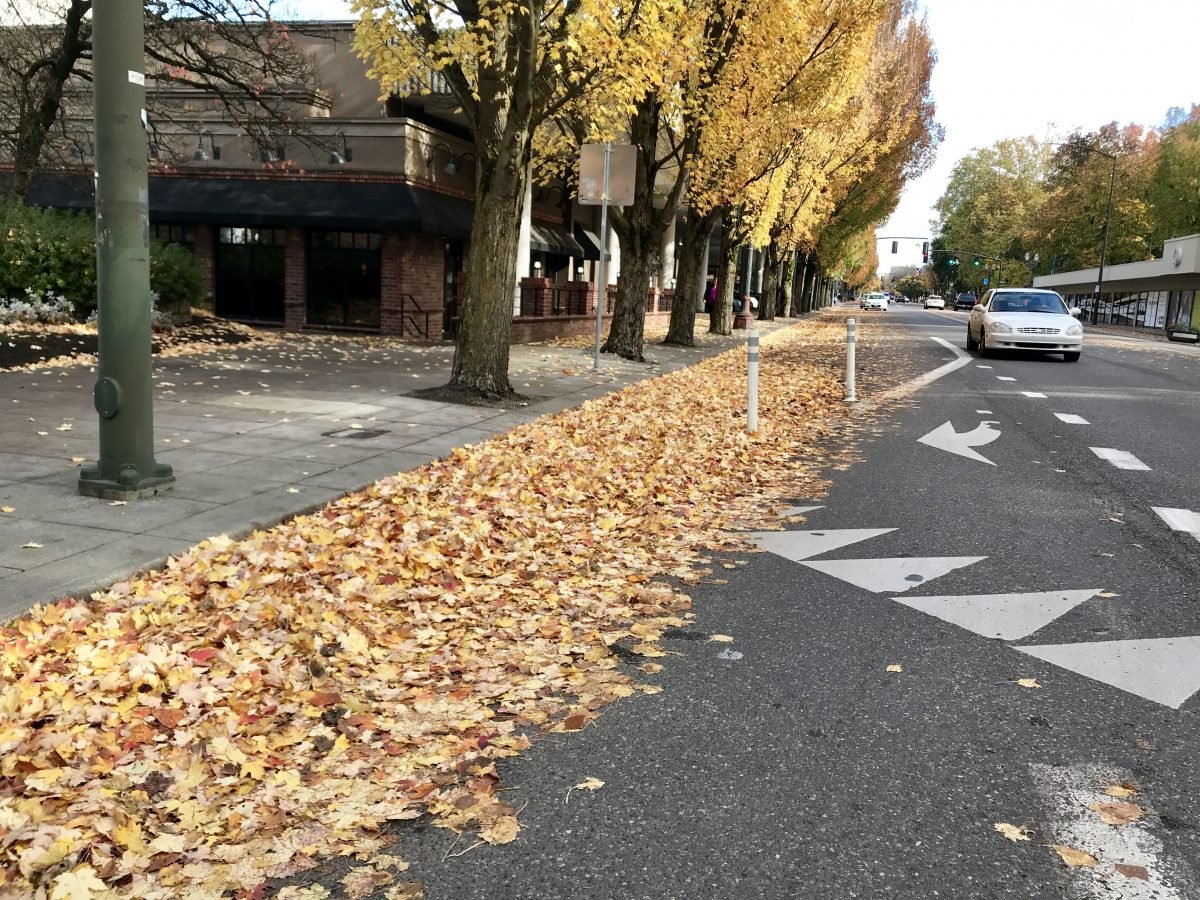 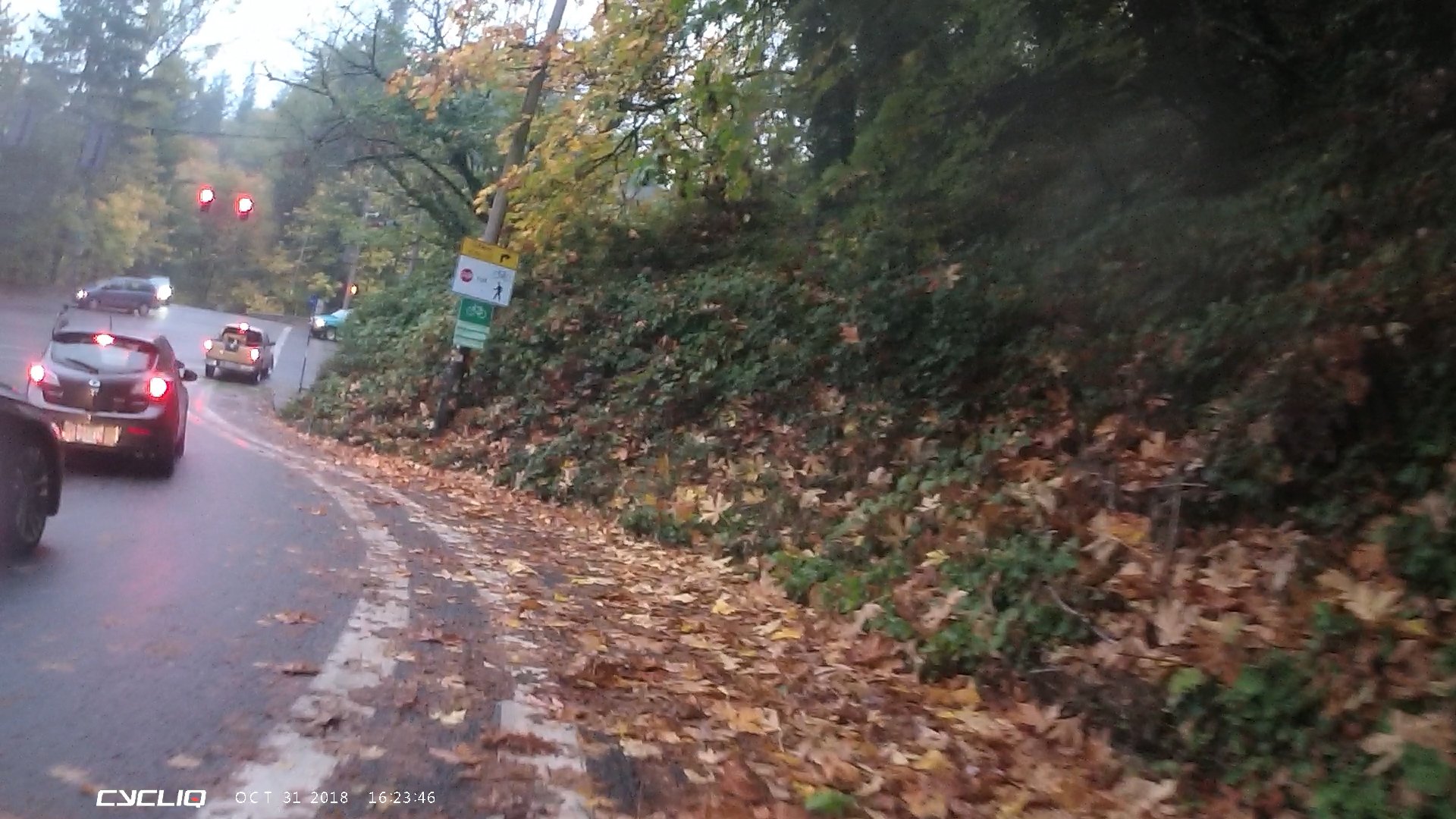 On Monday morning we highlighted a Tweet from Portlander Steven Mitchell who rides regularly on SW Terwilliger Blvd.

Then yesterday he posted video (watch it below) that showed him trying to avoid the slimy accumulation of leaves, only to be the victim of an unsafe pass by a man driving a pickup truck. 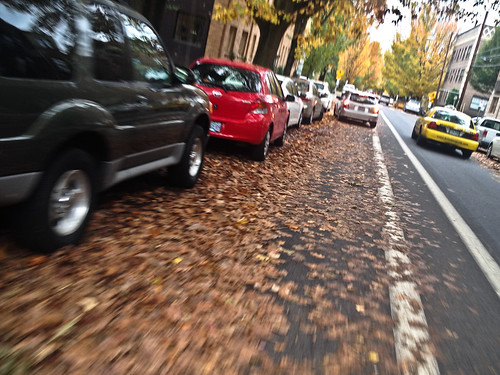 Seems like every year around this time we have to do a post about leaves in the bike lanes.

Portland is a tree city. I love all our street trees! But they also make for messy streets this time of year when rain mixes with wind. When I’m driving my car, leaves on the street don’t bother me at all because there’s zero chance of slipping on them. I can also count on the wheels of other drivers to whisk the leaves out of the lane in very short order. Cars are great street sweepers. 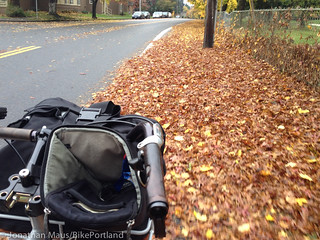 It’s that time of year when the beauty of fall becomes a bane to bike riders.

We marveled at the leaves last month and rejoiced while riding through them. But now that we’ve gotten soaked and many of these leaves haven’t been swept up, they have become yet another unnecessary annoyance that adds to the dangers and difficulty of bicycling during this time of year.

Unfortunately, it’s not just Mother Nature or a lack of city sweeping that’s causing this problem. We’ve seen for ourselves and have had readers contact us about landscaping crews that are blowing leaves into bike lanes. 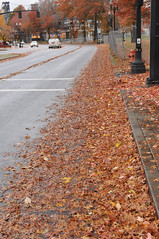 Leaves in the bike lane
on Naito this morning.
(Photo © J. Maus)

After the burst of fall was followed by stiff winds and rain last night, leaves are covering many bike lanes in Portland. For cars, leaves aren’t a big deal, because the mass, velocity and tires on a car act like sweepers to keep lanes clean. But bikes aren’t big enough to have that same effect, so the leaves pile up.

The dangers of leaves are two-fold: Ride in them and risk slipping out in the slimy muck; ride around them and risk getting hit by other traffic in other lanes. Add in the early darkness of the evening commute and it becomes even more important to keep bike lanes free of debris and hazards.

I noticed nearly all of the northbound bike lane on Naito Parkway was completely covered in leaves this morning. I’ve also heard of major leafing up on N. Willamette on the bluff overlooking Swan Island. 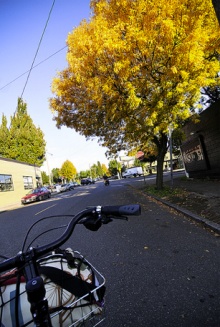 With this picture perfect weather we’ve been having I decided to take the long way home yesterday in order to see some fall colors. At the recommendations of some friends, I found my way to SE Ankeny where the bright yellow leaves of golden ash trees (thanks for the identification help Esther!) lined the street.

Riding in fall when the leaves have turned is one of the secret pleasures of going by bike. Sure, you can see leaves from a car; but on a bike, you feel literally surrounded by them. I shot most of the photos in this post with a wide angle while pedaling to give you an idea of what I mean…

“It appears the bike riders have gotten a little soft over the years…Just be careful, folks. It’s not Afghanistan.”
— Eugene resident Marty Casado in a letter in the Eugene Register-Guard about concerns over leaf piles in the bike lane

We’ve been following the issue of leaf piles as a danger to bike traffic both in Portland and, most recently, down in Eugene.

Bike advocates in Eugene are pressing the city to clean up the problem. Shane Rhodes is a Eugene-based bike advocate and has been active on the leaf issue. He’s also on the City of Eugene’s Bicycle and Pedestrian Advisory Committee and sent us an update from their meeting last night. He also sent along the text of an entertaining letter to the editor from today’s Register-Guard newspaper and his response. 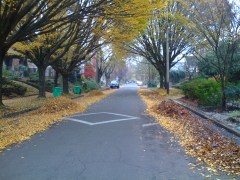 Leaves where bikes like to be.
(Photo: Elly Blue)

Every fall in Portland, mounds of leaves pile up on neighborhood streets, creating slippery conditions on road shoulders and sidewalks.

Yesterday the Oregonian featured a story about a new “leaf tax” being considered by Mayor-elect Sam Adams that would create “leaf districts” in areas of the city with many street trees.

Adams’ idea made me wonder if this new tax would improve biking conditions.