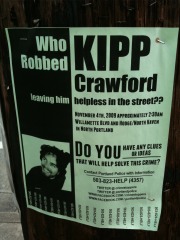 In the early morning hours of November 4th, 2009, Portland musician Kipp Crawford, 39, was hit and killed by two separate drunk drivers. Last night The Oregonian reported that after over a year, Crawford’s parents have finally gotten some closure in the form of legal action in their son’s death.

According to The Oregonian, one of the people who ran over Crawford, Felisa Larae Washington, plead guilty to DUII in a Multnomah County court yesterday and was sentenced to 15 days in jail, three years of probation, and a $1,000 fine.

Kipp Crawford and his mom Jean.
– Video Below –
(Photo: PPB)

The Portland Police Bureau is handling the November fatality of 32-year old Kipp Crawford as a homicide and they have just announced a $1,000 reward for information leading to an arrest in the case.

At a news conference today (watch video below), PPB Detective Bryan Steed said he believes Crawford was the victim of an assault and robbery just prior to being hit being struck by two separate motor vehicles. Crawford, a popular local musician who used a bicycle as his primary means of transportation, was riding on North Willamette Boulevard near Hodge Street in the early morning hours of November 4th just prior to the incident. 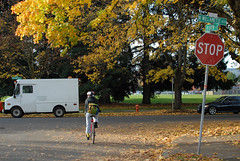 Bryan Parman with the Portland Police Bureau Traffic Division has just confirmed that the two people operating motor vehicles that struck and killed a man on N. Willamette this morning were cited for driving under the influence.

Portland Police PIO Mary Wheat has also released the identity of the man who was killed. It was 31-year old Portlander Kipp Daniel Crawford. Crawford was a local musician and member of the band Thanks Kipp.

According to a report just published by The Oregonian’s Noelle Crombie, the people operating motor vehicles in this incident were 41-year old Carlos Tyrone McCall and 44-year old Felisa Washington-Berry. Crombie also reports that:

A person on a bike attempts
to cross Willamette from N. Haven.
-Video below-

I’m still awaiting more details from the Police about this morning’s fatal crash near University of Portland at N. Willamette and Haven in North Portland.

So far, all we know is that two cars were involved and one man is dead. KATU is reporting that the police say the man was “pushed into traffic” and that neighbors say they heard an argument prior to the incident. KATU also reports that the drivers of the cars are being held for questioning.

[I’ve just published a new story with photos, notes and a video of the area around the crash. — Jonathan]

Street view of Willamette and Haven
(University of Portland is on the right).

The Portland Police Bureau has determined that a man was hit by two motor vehicles while riding his bicycle in the area of North Willamette and Haven near University of Portland early this morning. The man — who has not yet been identified — later died in the hospital.

Here’s more from the Portland Police:

This morning at 2:26 a.m., Portland Police responded to the area of North Willamette Blvd and North Haven Street on a call of a bicyclist that had been hit. Officers located an injured man at the scene and he was immediately taken to an area hospital. This man later died at the hospital. Police are attempting to identify the deceased man.

Investigators from the Major Crash Team have determined that the bicyclist found on North Willamette Blvd. was hit by two vehicles. Both drivers and their vehicles are at the scene of this incident and investigators are interviewing both drivers.