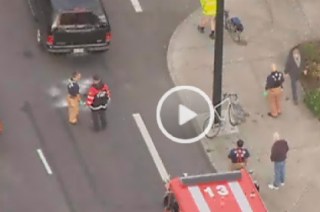 Still from KGW-TV video taken at the scene in 2012.

A Portland man who was blamed for a collision on a notorious section of North Broadway three years ago has been absolved in court.

Three years ago 33-year old Karl Zickrick was riding down North Broadway on his way to work. As he approached Wheeler he noticed a large SUV encroaching into the bike lane in front of him as it prepared to turn right. To avoid being right-hooked, Zickrick moved to the left out of the bike lane to go around the SUV. However, just as he made that move the driver of the SUV, 62-year-old Michael McLerren, slammed on his brakes and Zickrick flew into the back window. The impact shattered the window and left Zickrick with severe facial injuries and a broken jaw. (Two months after this collision, former Mayor Sam Adams decided to prohibit all right turns onto Wheeler.)

Adding insult to injury, the Portland Police Bureau blamed Zickrick for the collision. The day the crash occurred the PPB said this in an official statement (emphases mine):