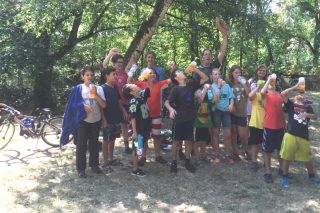 Portland author Joe Kurmaskie says he feels conditions on the Springwater Corridor path have gotten so bad that he might be forced to cancel his popular teen summer bike camp program.

Kurmaskie, who turned 50 this year, is known for his “Metal Cowboy” books that describe his many adventures while bike touring through the United States and around the world (including two cross-country journeys with his wife and five children). He moved to north Portland in 1998 and now lives in Sellwood. For the past four years he’s run the “Camp Creative: No Child Left Inside” summer camp for 9-13 year olds in partnership with Portland Parks & Recreation. The camp is completely bike-based and the main route used to access activities is the Springwater Corridor. This year Kurmaskie says he’s decided to put the camp on hold because of an increase in unruly and unsafe behavior from people he’s encountered along the path.