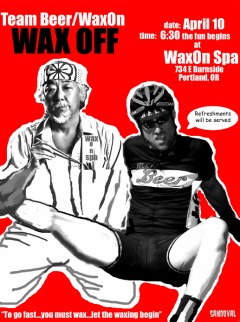 Leave it to Portland’s very own Team Beer to do what might possibly be the most outlandish bike team sponsorship promotion ever: The Team Beer/WaxOn Wax Off.

According to Team Beer spokesman John Howe, the event is a way to get some attention for their newest sponsor, WaxOn Spa on East Burnside. Howe says several teams have committed to take part and so far there are eight contestants. “The theory of the contest is to see who makes the biggest transformation — from toes to neck.”