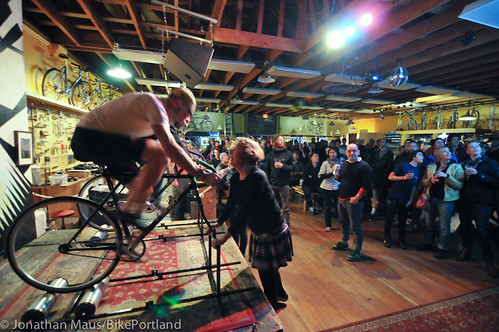 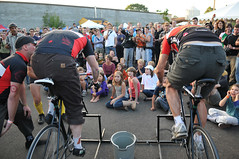 Velo Cult Bike Shop (1969 NE 42nd Ave) has announced a weekly goldsprints competition that will start this Friday (2/1). Goldsprints — also known as roller races — are a spectator-friendly competition that pits two riders against each other in an all-out sprint to victory. The competitors pedal bicycles that are attached to a stationary fork up front and the rear wheels turn in a set of rollers in the back. Both bikes are attached to an electronic timing system and their riders’ progress is displayed on a projection screen behind them so fans can see their progress and root them on.

Back in 2009, 42Below, a vodka brand owned by Bacardi, purchased 22 goldsprints set-ups (the bikes, computers, rollers, timing equipment, and so on) with the goal of setting them up at local bars throughout the country. One of the cities they selected was Portland. After there initial promotion of the events, they gave the systems to local bike clubs. We were approached by Bacardi and eventually connected them with Team Beer, a local club that was interested in taking over the goldsprints equipment.