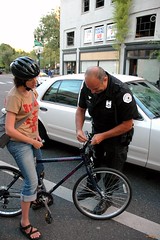 A Portland police officer gives
out a free set of bike lights
back in August 2006.
(Photos © J. Maus)

As part of their ongoing Eye to Eye campaign, the Bicycle Transportation Alliance (BTA) and the Traffic Division of the Portland Police Bureau have partnered up on an effort to increase awareness of using bike lights and being more visible while riding. Their efforts build on a history of bike light advocacy here in Portland that started over three years ago.

According to a press release issued this morning, the BTA will kick off the project tomorrow with an event at the “Seven Corners” intersection (SE Division, SE Ladd, and SE 20th). They’ll be serving “mocktails” (non-alcoholic beverages) and giving cyclists information about lights and visibility.

That event will be followed by a series of “targeted bike light education and enforcement actions” by the Police Bureau. The actions are slated to begin next week and the plan is for police officers to educate non-lit cyclists about light laws, pass out safety information, and install free lights (thanks to an ODOT grant) when necessary.