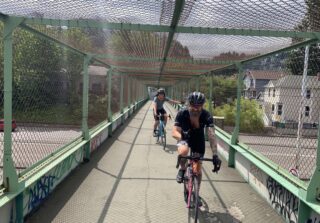 Portlander M. Blomberg (in the back) rode the PDX Gold route last week to raise awareness of the campaign.

Portlander Devin Bailly likes to suffer. He’s known in local cycling circles as that crazy guy who loves climbing and is one of the caretakers of the three toughest bike routes in Portland: Ronde PDX, La Doyenne, and Giro PDX. Those three routes rise an average of over 7,000 feet each in only about 50 miles (trust me, that’s tough).

But Bailly knows his suffering is a choice. The death of George Floyd and rise of the Black Lives Matter movement has made him acutely aware that for too many Americans the lifelong suffering from racist actions and policies is never a choice.

To help support the movement Bailly has leveraged his social network, expert route-making skills, and passion for climbing hills into a campaign he calls “BLMtoPDXBikes”. In its first month the effort has raised over $25,000 and he’s looking for more people to get involved — whether that means hopping on a bike or hopping online to be a sponsor or donor.

Here’s how it works:
— Make a donation to a non-profit organization working to advance racial justice.
— Email the receipt(s) to BLMtoPDXbikes@gmail.com before 7/31/2020.
— Campaign sponsors will match your donation.
— BLMtoPDXBikes will email you back a receipt verifying the matching donation was made. END_OF_DOCUMENT_TOKEN_TO_BE_REPLACED

Attention climbers: Another member of the “Ronde” family has been born 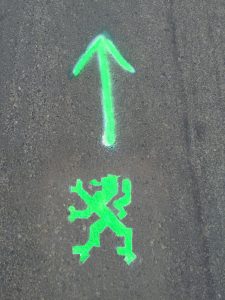 One thing I’ve always appreciated about Portland’s incredible culture around bicycling is how one great idea begets another. It’s typical of any healthy cultural ecosystem: One person does a cool thing and it inspires another person to do a cool thing that riffs on the original cool thing. And so on and so forth.

The Ronde PDX is a perfect example. That unsanctioned ride was first held in 2007. Only about 100 intrepid souls showed up that first year, eager to challenge themselves against an insanely difficult route that tackled nearly ever climb in the west hills between Saltzman Road and Council Crest.

Word spread quickly about the Ronde and a few years later it had become a bonafide phenomenon. Then in 2013 the Ronde spawned La Doyenne, another epic ride scheduled for the same weekend. This gave strong riders the opportunity to climb about 15,000 feet over 100 miles in two days.

Now there’s a third ride in the series: the Giro PDX.
END_OF_DOCUMENT_TOKEN_TO_BE_REPLACED