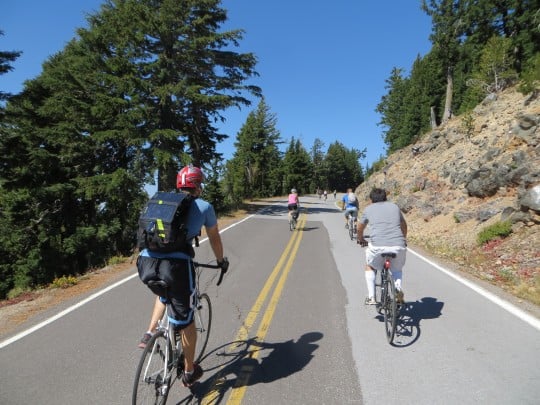 Let’s hear it for Oregon’s National Parks Service staff and Travel Oregon. They’ve made carfree Crater Lake a reality. And it is good.
(Photos by Rebecca Hamilton)

As we mentioned in the Weekend Event Guide, Saturday is the last day this year to experience a carfree ride around Crater Lake. Contributor Rebecca Hamilton experienced it last week and has some tips to share.

Crater Lake National Park will host its last carfree day of 2014 this Saturday, September 27th. Although the West Rim Drive will remain open to motorized vehicles, the East Rim Drive’s 24 miles (of the 33-mile loop) around the caldera rim are yours to enjoy on foot or two wheels without a single stop sign or RV along the way. 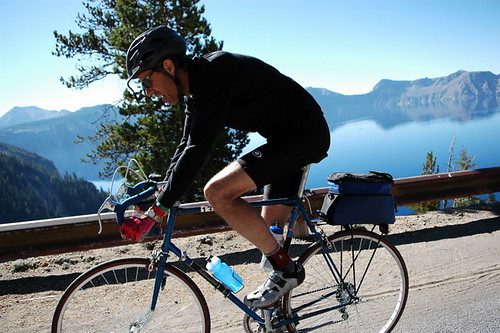 There’s nothing quite like it… especially without any cars to deal with.
(Photo J. Maus/BikePortland)

If you missed a chance to ride McKenzie Pass without being disturbed by noisy and smelly cars (it was just re-opened to all traffic over the weekend), then I’ve got some great news: Officials from Crater Lake National Park and Travel Oregon just announced this year’s dates for their own version of carfree cycling spectacularness.

This year there will be three different dates when certain sections of Rim Drive will be open only to non-motorized traffic: June 21-22 (this weekend!), Saturday September 20th and Saturday, September 27th. 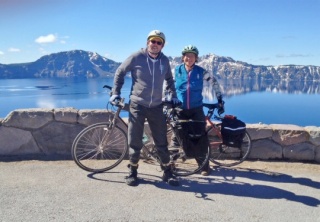 Reader Sally Hunt and a friend took
full advantage of a carfree Rim Drive
back in June.

Travel Oregon is set to announce tomorrow morning that Crater Lake National Park will hold another carfree weekend on September 21st and 22nd this year and that, “Going forward, the third weekend in September will be preserved for non-motorized enjoyment of the park.” 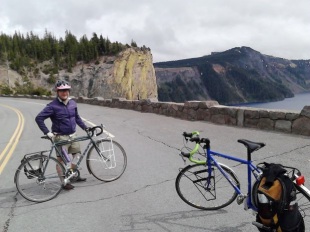 The legendary Rim Drive around Crater Lake was officially carfree for the first time ever this past weekend. And even though the official announcement gave folks just a few days notice, it appears many people showed up to ride one of the most scenic roads in America in total silence and comfort.

Yesterday we got an email from Crater Lake National Park Superintendent Craig Ackerman. He shared that “a large number of cyclists” took advantage of this rare opportunity. Ackerman also said he’d like to expand the carfree designation in future years.

“We are very much interested in making this an annual event,” Ackerman wrote, “and will contemplate making it a longer opportunity if possible.”