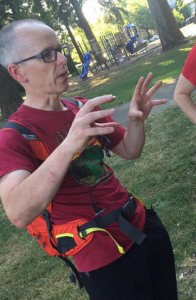 Many BikePortland readers are familiar with the work of Carlton Reid, a leading writer for the U.K. news outlet BikeBiz. As of last month, Reid is familiar with Portland, too.

Reid stopped through town for a few days on a tour promoting his new popular history of early bicycling, Roads Were Not Built for Cars. As a side project, he also put together one of the most concisely accurate summaries I’ve seen of Portland and biking at this moment in our history.

Here’s a passage from the piece published today on BikeBiz:

Bike commuters may dominate in some bohemian enclaves but across the city they make up just six percent of the total. This is stellar by U.S. standards – ten times the norm, in fact – but in comparison with, say, Copenhagen, it’s not even in the same galaxy.

Stats can be misleading though. When riding around Portland it’s clear this is a city where, in certain areas, cycling is perfectly normal, not just for getting to work but for running errands or riding to a night out. Bars and shops have bike-corrals (rows of cycle parking hoops instead of car parking spaces) and the light rail system is geared up to take bikes. Portland’s six percent modal share has to be seen in context – in 1990 it was just 1 percent. Between 2000 and 2008 the civic authority’s proactive bicycle programme helped add the other five percent, and the city has held it at that level ever since. Ten percent of kids cycle to school, nine percentage points higher than the U.S. national average. 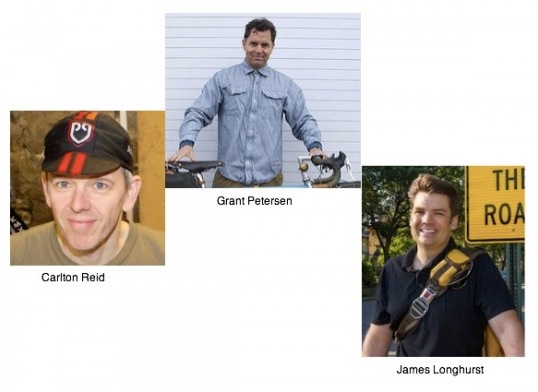 All three on their way to Portland.

One fringe benefit of living in a town where so many people love cycling is that we are fortunate to be a common stop for authors, thinkers, innovators, and other cycling luminaries. If you have something important or interesting to say about cycling, the thinking goes, there’s a very good chance you’ll find a receptive audience in Portland.