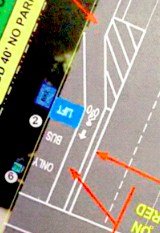 It’s been an issue ever since the protected bike lane (a.k.a. cycle track) on SW Broadway went in: How to improve access for TriMet LIFT Paratransit Program vehicles that need direct access to the curb in order to drop off and pick up people with disabilities, while not blocking the flow of bike traffic.

In its current configuration, the bike lane on SW Broadway near Portland State University is curbside and the auto parking lane is in the street. This was done to create a protective buffer between people on bikes and people in moving auto traffic. The problem is, LIFT vehicles need to extend a ramp so that riders with wheelchairs can roll directly onto the sidewalk.

When the SW Broadway bikeway first opened, vans parked at the curb. Some people on bikes were perturbed by the blockage of the lane, which forced them to either stop and wait, or squeeze between the LIFT vehicles and parked cars. “TriMet has come under criticism by a vocal minority of cyclists for blocking the cycle track,” reads a PSU document about the new plan. 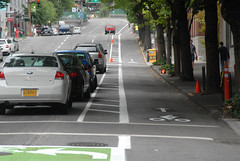 Researchers at Portland State University have completed an evaluation of Portland’s cycle track on SW Broadway and buffered bike lanes on SW Stark and Oak. The analysis, prepared for the Portland Bureau of Transportation (PBOT), shows that both of the bikeway types are “working well,” but PSU also laid out some recommendations on how to make them work even better. 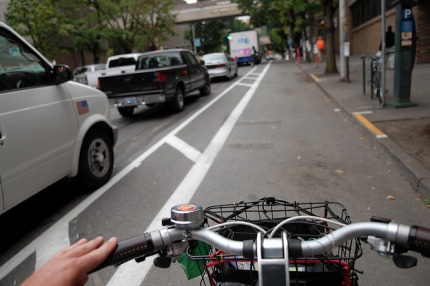 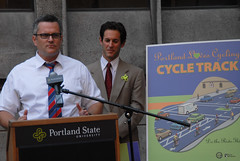 Mayor Adams said things like the
cycle track are why Portlanders drive
an average of 20% less than
people in other cities.
(Photos © J. Maus)

Yesterday, the City of Portland unveiled their first cycle track. At a press conference on the campus of Portland State University, Mayor Sam Adams was joined by PSU President Wim Weiwel and BTA leader Scott Bricker to sing each other’s — and the cycle track’s — praises.

The turnout at the press conference by the local media was amazing. I counted four TV station cameras and a bevy of local reporters. In Portland, re-configuring a downtown street to create space specifically for bicycle traffic is a big story (especially when that space was created by removing one lane previously used by motor vehicle traffic). 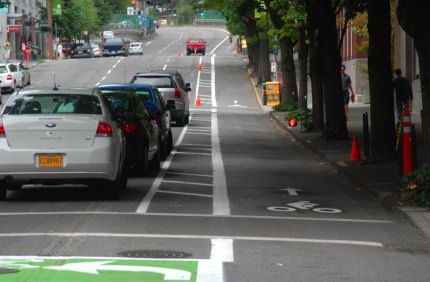 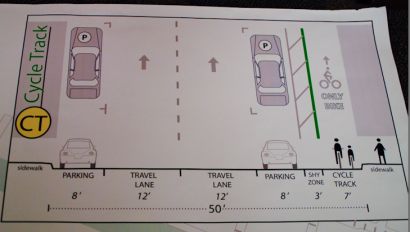 Mayor Sam Adams’ office has just announced that the new cycletrack on SW Broadway will open this Monday, August 31st, in a 2:00pm ceremony on the Portland State University campus.