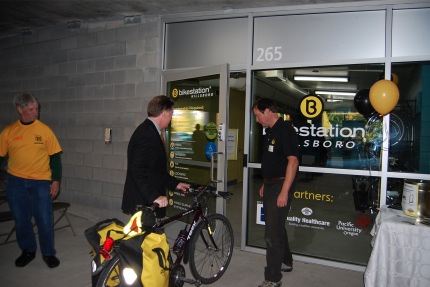 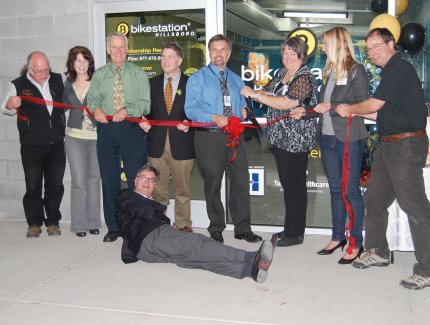 As a follow-up to a story we reported last March, the facility that houses Bikestation Hillsboro will have its grand opening tomorrow. The new Bikestation — the first of its kind in the Portland metro region — is set to open in a few weeks. It will offer over 1,200 square feet of secure bike parking accessible by members through electronic card access 24 hours a day. The new Bikestation is located on the ground floor of the five-story, 20,000 square foot Hillsboro Intermodal Transit Facility (ITF) that will have a grand opening event tomorrow. In addition to bike parking, the ITF will house motor vehicle parking, street-level retail shops, and EV charging stations. 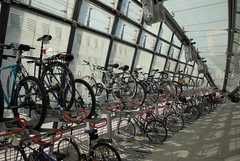 A new Bikestation is coming to Hillsboro.
(Photo is of Bikestation DC).
(Photo © J. Maus)

If all goes according to plan, Hillsboro (about 20 miles west of Portland) will be the first city in the Portland region to have a one-stop bike storage, shower, and locker facility — also known as a Bikestation.

While at the National Bike Summit I ran into Andrea White-Kjoss, the President and CEO of Bikestation (a division of Mobis Transportation Alternatives), who confirmed the news. I have since heard from City of Hillsboro Planning Manager Colin Cooper, who gave me more details on the project. 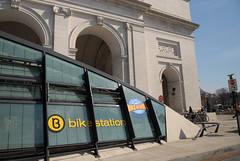 Today I took a peek at the latest and most conspicuous addition to Washington D.C.’s transportation infrastructure — Bikestation DC.

Opened for business only since last October (it was under construction last time I was here), the facility is striking in stature and has a location that any bike planner would drool over. The modern, curved glass structure sits just a few yards from the main entrance of Union Station, a historic landmark and tourist attraction visited by 32 million people each year. The dynamic lines of the Bikestation create an interesting juxtaposition to the Classical-era inspired architecture of Union Station. 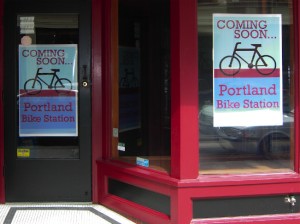 Several readers have alerted me to a mysterious sign posted on a vacant storefront on SW 3rd that reads, “Coming Soon… Portland Bike Station”.

I made a few calls and couldn’t find out much about it. One source did confirm for me that it is legit and that something is in the works. I’ll have more as soon as I find out.

One other thing I’ve confirmed is that it won’t be a Bikestation, as in the officially trademarked name of the non-profit organization that has its branded facilities in Seattle, Santa Barbara, Long Beach, and other cities. 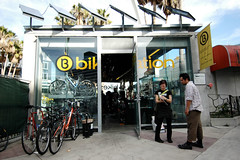 A reader sent over a story from Marketwire that I thought was a very good sign for biking in America.

Tech Coast Angels (TCA), “the largest angel investor group in the United States”, has decided to invest $500,000 in Bikestation. Bikestation — which is now a registered trademark of Mobis Transportation Alternatives, Inc. — plans, designs, and operates “bike transit centers”. The facilities provide secure parking and other amenities to urban bike commuters (I visited a Bikestation in Long Beach back in 2007).

BikeStation Portland
Market Street Pub, 1526 S.W. 10th Take Trimet (Outside on patio. Bike parking on site. Near to Carfree Conference site.)
6:00pm – 7:00pm
Join Todd Boulanger, Chairman of Bikestation for a few beverages to discuss the status of large scale secure bike parking in Portland and the US. (How to get one for your city!) Bikestation is the USAs bike parking network with soon to be 8 bike parking hubs: Seattle, San Francisco, Berkeley, Palo Alto, Santa Barbara, Long Beach, Tempe, and DC.

In downtown Long Beach, those who ‘go by bike’ don’t exactly get the red-carpet treatment.

The streets are wide, the cars go fast, and there are few bike-friendly routes. The safest place to ride is on the sidewalk, but that’s illegal.

BikeStation Executive Director Andrea White was in town earlier this week. Accompanied by a BikeStation board member, the pair met with city officials and private developers to discuss the potential of a new bike parking facility (or facilities) in Portland.

In an interview after her trip, White said the possibility for a “bike-transit” facility in Portland is stronger now than it’s ever been,

“… there is incredible interest in and support for bike-transit centers in Portland. I would say since my last trip there two years ago, the people that we met with have moved forward significantly in their commitment to building facilities. I think it’s just a matter of where and when.” 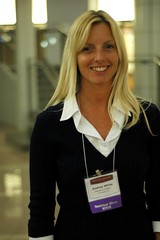 Bikestation is a non-profit that has helped develop secure bike parking facilities in many cities across the country. There are currently six Bikestations, one in Seattle and the others in California.

The city of Portland has discussed a potential Bikestation facility for many years. Last night I bumped into their Executive Director, 32 year-old Andrea White (photo, right). Andrea has been working to bring one to Portland for the last two years.

I asked her where things stood.