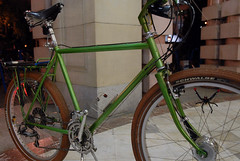 Every now and again I come across a bike on the streets of Portland that I feel is worth sharing.

Back in December 2007 we featured Gram Shipley and his scraper bike. Last night, outside the Bike Commute Challenge party at City Hall, I did a double take on a customized old-school mountain bike with an odd brake configuration. A few minutes later, its owner walked up and I realized it was Mr. Shipley yet again.