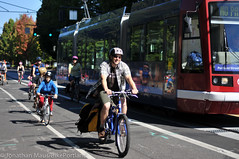 Bike Score (the same folks that created the more widely-known Walk Score) have ranked Portland as the #1 “most bikeable” large city in the United States. In their rankings, which were released today to coincide with National Bike to Work Week, Portland squeaked into first place, just 0.3 points ahead of San Francisco. Denver, Philadelphia, and Boston rounded out the top five spots.

When these same rankings came out last year, Portland was #2 behind Minneapolis, but this year cities above 500,000 people competed against each other while smaller cities were put on a separate list.

And for the first time ever, the Bike Score team also scored individual neighborhoods. In Portland, the Lloyd neighborhood was found to be the most bikeable, receiving a 98.2 out of 100 points. The Bike Score methodology ranks locations based on four equally weighted components: Bike lanes, hills, destinations and road connectivity, bike commuting mode share.